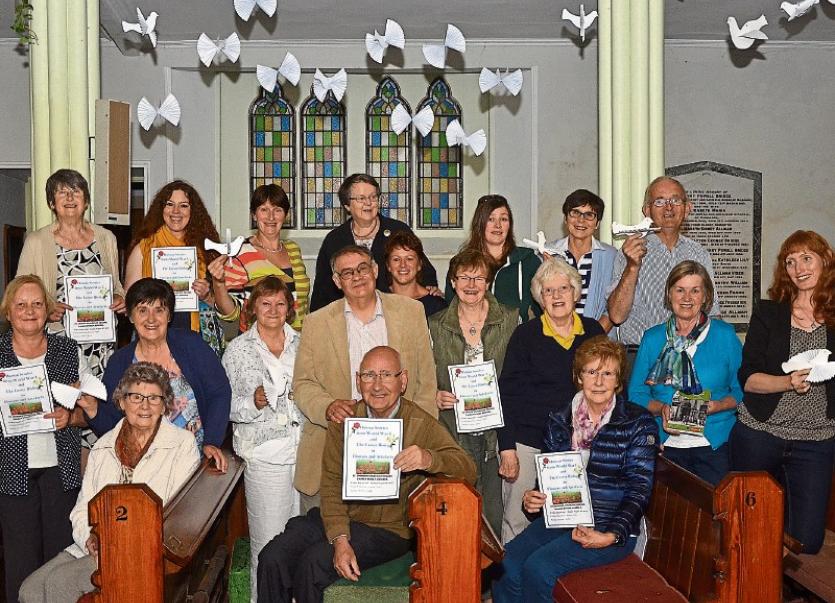 During National Heritage Week, St. Cronan’s Church of Ireland, Roscrea is organizing an exhibition entitled ‘Human Stories,’ commemorating the centenaries of World War I and The Easter Rising in flowers and artefacts.

While opening on Thursday evening, August 25th, the exhibition runs daily from Friday 26th and Saturday 27th August from noon until 8pm, and closing on Sunday 28th August at 6pm. Admission is by voluntary donation.

Organized by local florists and an enthusiastic team of voluntary flower arrangers from Roscrea community and beyond, together with historians, the fifty displays, all supported by appropriate and colourful flower arrangements bring together a commemoration of both these complex periods of national and international history under the same roof.

Exhibits include displays depicting the ten prominent nations of the world at the time, and arrangements remembering the Proclamation signatories and other 1916 leaders, acknowledging their human life story.

There will also be displays of some World War I memorabilia which will be balanced by ‘moments in Irish History 1916-2016, and artefacts which people wish to offer on loan for the World War I exhibition will be greatly received.

Furthermore, people are being given the opportunity to sponsor displays in memory of a loved one at €50 or upwards, and anyone wishing to offer help in any form can contact Adrian Hewson (Co-ordinator), Heather Evans (Secretary), Hazel Percy (Treasurer), Joan Murray (PRO) or Canon Jane Galbraith (Rector).

It’s an opportunity to bring people together, and to help people realize that there is another way than war in the 21st century and to salute this idea the central aisle of the church honours the United Nations and is called ‘The Aisle of Peace.’