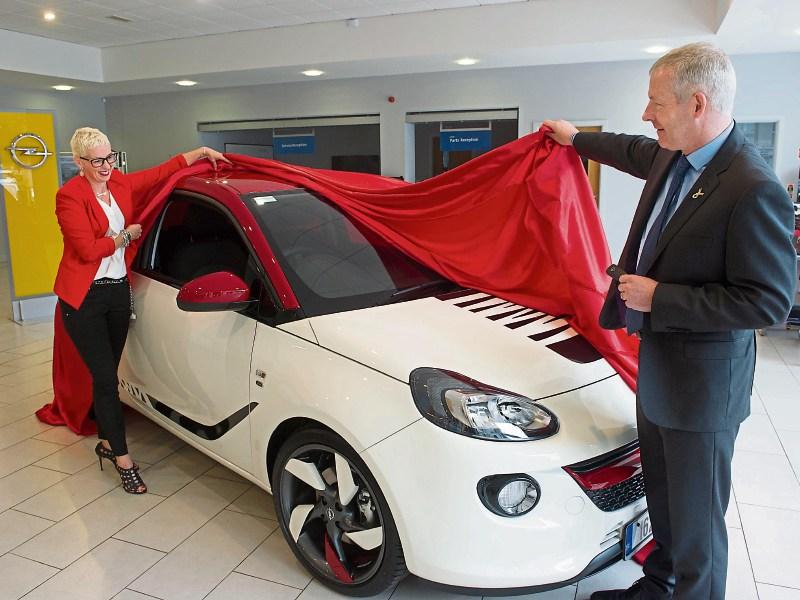 TTYL GONE for a Cuppa’s exterior was designed by Fethard woman, Sue Anne O'Donnell, in memory of her 19-year-old son Adam who died in a car crash on his way to work on Valentine’s Day, 2014.

This was a European-wide campaign by Opel involving twelve countries, in which they asked the public to design their own Opel ADAM car (body colour, roof colour, wheels, exterior decoration) and name it. These entries were put online and voted for over three months (December 2015 - March 2016).

The top ten entrants with the most votes were shortlisted. A jury then selected one winner from each market. In Ireland, this jury consisted of Opel Ireland management and stylist/presenter, Lorna Weightman. The winner's design then went into production as a limited edition which they get to keep for life, and goes on sale to the public in September 2016. For Sue Anne and the Irish market the car is 'TTYL GONE for a Cuppa' with more information on www.adamyourself.com

And so, just after 11am on Saturday last, Willie Butler and staff welcomed friends, family and voters to the showroom to see the much anticipated winning design, while sharing a cuppa and raising funds for Opel's Partner charity Childhood Cancer Foundation.

Sue Anne laughs as she describes her campaign of, “Gently annoying voters, morning, noon and night for 67 days asking them to vote, also asking them to tag friends, send her photos of their daily Destination Voting Cuppa! I have all photos saved so I can treasure every cuppa and every vote,” she says.

Voters also sent in the name of their favourite driving tune which Sue Anne has since added to her collection and fondly calls it her 'Opel ADAM Playlist' which she says reminds her of the voters when she hears their song.

The morning’s event was a buzz of chat and laughter with some tears but in Sue Anne's words, “This was the perfect morning as everyone shared a cuppa while chatting and raising €180 for the Childhood Cancer Foundation.”

Sue Anne and family are very grateful to all the staff at Kevin O'Leary Clonmel in particular Willie, Carol, Caroline and Seamus for organising this brilliant morning. “It just wouldn't have been possible with their help”, says Sue Anne.

Wishing Sue Anne many happy and safe years of motoring.