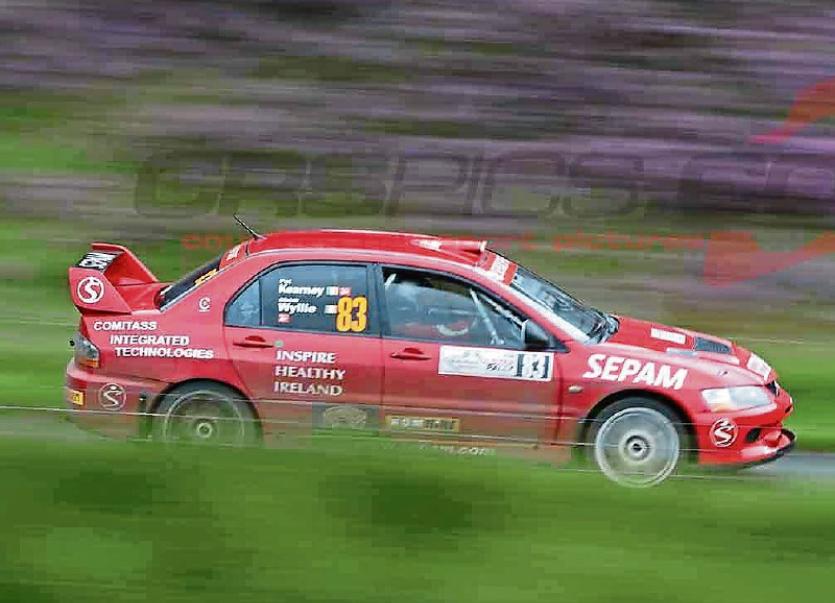 Team Sepam Sport headed north for the city of Derry for round 6 of the Clonakilty Blackpudding Irish Tarmac Rally Championship, the Johhn Mulholland Motors Ulster Rally.

Following 2nd placed Group N points on the Donegal Rally; Clonmel’s Gus Kearney and Kilcommon’s Tommy Hayes, were keen to continue their improving form in Derry, as they started the event in 2nd in the series to Group N leader; Cork’s David Guest. Gus’s brother Pat, partnered by Rosscarberry’s Alistair Wyllie, was eager to return, having had to miss Donegal and home event; the Stonethrowers, due to business commitments. As always, the Clonmel brothers were competing in their Gerry McGarrity Motorsport prepared Mitsubishi Lancer Evo 9s.

A fantastic field of machinery started the event on Friday, with the event being c amounting round of the Irish Tarmac series, as well as the Northern Irish series and the British Rally Championship. Both brothers settled into the challenging conditions waiting for them on the closed roads of Derry and Tyrone. Tyre choice proved to be alottery with, varying levels of grip, due to muddy conditions and regular rain showers. Pat and Alistair finished the day in 59th overall, despite electrical issues. In contrast, Gus and Tommy lay in 67th overnight, following a “moment” which cost them the best part of a minute on stage 3.

Day 2 took the crews across 8 stages. Gus and Tommy were quick out of the blocks on Saturday morning with a fast times on the opening stages to climb 11 places in 2 stages. However the Tipp crew’s hopes were punctured, quite literally on stage 9, when a stone cut the front left tyre. Almost 7 minutes were lost between driving on a flat and the subsequent wheel change. Pat and Alistair drove at a steady pace on the morning stages, mindful of the tough nature of the event, delighted to lie 53rd overall and 2nd in the Tarmac points following their electrical maladies on Friday mindful of the tough nature of the event.

Conditions continued to deteriorate on the sideroads of Ulster on Saturday afternoon, making it a game of survival. The final 4 stages saw Pat and Alistair climb to 50th overall and maintain 2nd placed Tarmac Championship Group N points. Gus and Tommy climbed from 80th overall to fight back to 64th overall at the finish and 3rd placed Tarmac Group N points after a trying 2days rallying. The result sees Gus and Pat now lying in 2nd and 3rd ,respectively, in Group N in the Clonakilty Blackpudding Irish Tarmac Championship on 64 and 44 points, with leader; Cork’s David Guest on 80 points, as the crews prepare to do battle again on the Cork 20 International Rally in October.