Plaque unveiled in Clogheen in honour of Thomas Clarke 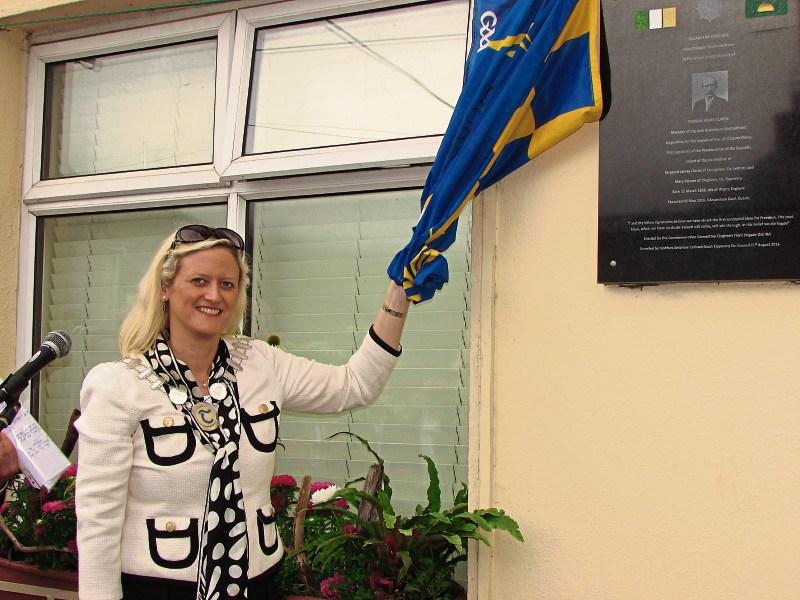 On Sunday last the local members of the Third Tipperary Brigade Old IRA Commemoration Committee unveiled a plaque in honour of Thomas Clarke signatory of the Proclamation in Clogheen.

This was as part of its commemoration of the centenary of 1916.

Tom Clarke’s mother, Mary Palmer was a native of Clogheen and the plaque is situated on her family’s ancestral home on the Main Street.

In spite of inclement weather and many other attractions the event was attended by a large crowd. The ceremony was graced by the presence of a colour party and guard of honour drawn from the Organisation of National Ex-servicemen and Women and the UN Veterans Association. The Master of Ceremonies was Michael Moroney, a prominent member of the Commemoration Committee who hailed from Drangan originally.

A beautiful laurel wreath was laid by Corporal Richie McGrath, a member of the Irish Defence Forces from the 1st Brigade Transfer Company, Collins Barracks. Thomas Quirke recited a decade of the Rosary in Irish. The 1916 Proclamation was movingly read by Commdt. Eamonn Cahill, 3rd Infantry Battalion, Kilkenny Barracks. Kevin O'Reilly, Secretary of the Third Tipperary Brigade Old IRA Commemoration Committee delivered an interesting and informative oration in honour of Tom Clarke, the first President of the Irish Republic.

In a similar vein Thomas Quirke read a selection from the last writings of Patrick Pearse, followed by a minute's silence for Clarke and his comrades and also another man associated with Clogheen, Fr. Nicholas Sheehy who was martyred in Clonmel 250 years ago. The piper then played a lament. Proceedings ended with Amhrán na bhFiann.

Tom Clarke was the first signatory on the Proclamation of the Republic a century ago. He was an unconquered and unconquerable Fenian, totally dedicated to the struggle for Ireland’s freedom for which he sacrificed everything – including his life. The people of Clogheen can be justifiably proud of their association with him.