50 years of devotion of Sister Mary marked in special celebration 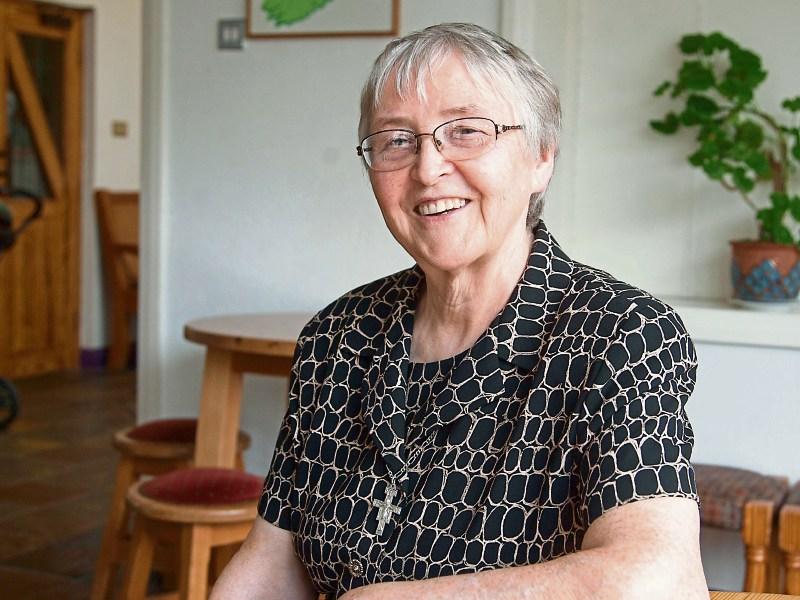 A special celebration was held recently to mark the 50th anniversary of the vocation of a Cashel woman.

Sister Mary Kennedy was surrounded by family, cousins and friends at the Bru Boru centre on a moving occasion for the Kennedy family.

Fr.Christy O Dwyer ,PP Cashel celebrated mass and up to eighty people attended a reception on the day.

Mary Kennedy was born in Cashel in 1946, the third child of Dinny and Mary Kate (O’Dwyer) both from Doon Co. Limerick.

She was educated at the Presentation Convent School from the beginning up to Leaving Cert. Mary was involved with the Legion of Mary from the Summer of 1958, under the leadership of Fr. Robert Bradshaw, the Chaplain to the Convent. Mary credits her vocation’s origins to this time. She was also involved with Muintir na Tire from its beginnings in Cashel around 1961, and with the Civil Defense for about a year.

Having completed her Leaving Cert, Mary entered the Sisters of St. Francis of Philadelphia on the 15t of August, 1963 in Mallow, Co. Cork. That order was founded by the 4th Bishop of Philadelphia, St. John Neumann, CSSR, a gifted linguist who was fluent in Irish and attended the Irish Immigrants in the coal regions of Pennsylvania. Mount Alvernia, the Convent in Mallow was mostly a recruiting station and life was tough there for the young postulants. After five months there, Mary and three other companions were put on a plane to the States, arriving in Boston on January 19, 1964 and connecting with a flight to Philadelphia. Within a week of arriving, Mary began her university studies, and her formal training first as a postulant, and then entered the Novitiate on August 12, 1964 and was given the new name of Sister Denis Mary. Two years of Novitiate followed as well as a year in the Juniorate for studies at the Motherhouse: Our Lady of Angels Convent in Aston, PA.

In August of 1967, Mary was missioned to Blessed Sacrament School in Trenton, NJ as a First grade Teacher. Mary continued in the teaching Ministry for twenty years, as a teacher and a principal and worked mostly in New Jersey, with six years also in Massachusets where she felt called to go to the Missions. It took five years to discern that call, but in July of 1987, Mary was released to begin preparations for the Missions. She spent a year in Puerto Rico, working in a school setting, learning to speak a bit in Spanish and then in September of 1988, she was sent to Guatemala for Language School. While there she received word that she was going to be missioned there, so she should check out ministry possibilities. The Diocese of El Quiche, under the leadership of Bishop Julio Cabrera Ovalle welcomed Mary and another Sister from her Community, Moira Frawley (A Clare Woman) to the Diocese in August of 1989. Their ministry was to sow seeds of hope in an area devastated by guerrilla warfare: home visits, catechesis, working and training Ministers of the Sick and Elderly, working with Community Leaders and Women’s groups in the outlying villages were among the tasks that needed to be done. After almost six years in Guatemala, Mary returned to her native Cashel, sent by her Congregation to care for her Mother who was greatly incapacitated. She stayed on for another two years after her Mother passed away to care for her Father.

On her return to the States she found everything to be very different, so she requested time to adjust and worked at the Motherhouse for a year and a half in their Spiritual Centre. After that, she was ready to go out and find a ministry where she could use her language skills, as well as all the other skills she had acquired over the years. She spent the next six years working with the Immigrant Community in Delaware County, assisting them with advocacy work, providing an ESL Program to assist with language acquisition and whatever needed to be done. In 2006, she returned to Ireland for a sabbatical and went to Dalgan Park, near Navan for Renewal. She also spent almost six weeks on Inis Oir trying to recover some of her Irish lost over the years. Back in the States, she took a position with Catholic Social Services attending to the mostly Mexican Community in Norristown and now in South Philadelphia, where her order began. Mary’s work now has taken a new turn working mostly with people who need healing, teaching them strategies for dealing with hurts in their lives, anger management and stress reduction. She feels very passionate about what she does, and feels, that this is what she was born to do.