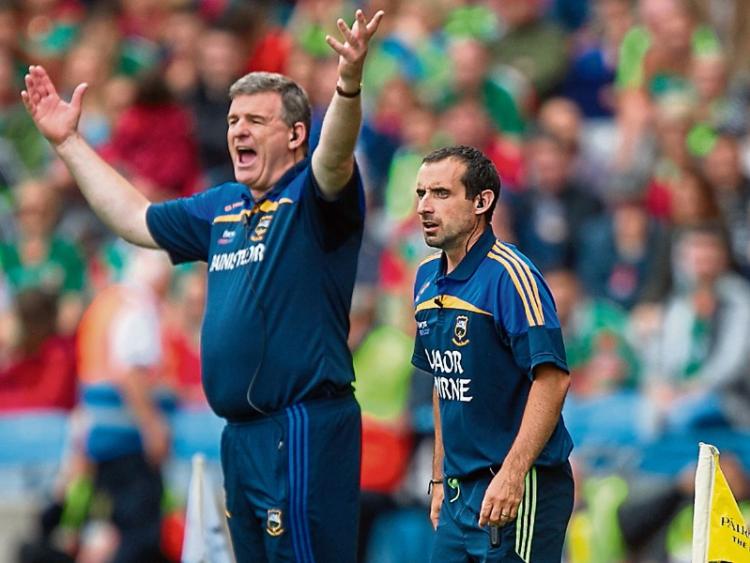 In the immediate aftermath of Sunday’s semi-final loss to Mayo, Tipp manager Liam Kearns, although hugely disappointed, took some consolation from the heroics of his side’s performance.

The Kerryman, in his first year as Tipp boss, after previous stints with Limerick, Laois, and under John Evans at Roscommon, had plenty to say.

“I was as proud of the team today as I was three weeks ago, maybe even more proud. I thought the second half was bordering on heroic - they were outstanding. I said to them at half-time that we were not going to lie down and in fairness nobody lay down. They went out and brought the game to them as we have done all through this campaign and ultimately we didn’t get the breaks. We had two injuries and the depth in our squad probably told in the end. We had a black card which was really hard to take and a red card at the finish.

“The second Mayo goal was a killer - we didn’t get the breaks but the players never gave it up. They played right to the end and they played football the way it should be played. They put everything in and we totally committed.” added the former Austin Stacks and Kerry player.

The loss of Robbie Kiely after eight minutes was perhaps the game’s key moment and Tipperary were left to rue and reflect on what might have been if the dynamic half-back had stayed on the field.

“Kiely loss - Huge loss. It took us until half-time to really sort it out in the dressingroom but we did sort it out and we got back to within two points. At that stage it seemed as though we would take it right down to the wire. But, we got a couple of more knocks and we couldn’t sustain those knocks” (referring in the main to the second goal and the red carding of Bill Maher immediately after that goal by Conor O’Shea).

The Tipp manager went on to add...

“We were going well when Robbie got the black card and we should have been more up at that stage, but once they got a run on us, they made hay and got the scores. Andy Moran caused us a lot of problems inside and they got on top in the middle third - that’s where all the issues were coming from and that’s where the damage was done,” he added.

The well-travelled Gaelic Football coach and manager, having experienced similar progress in the past with other county teams, knows full well that it must be a continual upward curve of progression for any county if they wish to break through to this level on a regular basis.

Referring to the standards set this year, Kearns added:

“These boys have been very comfortable out here and have not let themselves down in the quarter- or semi-final, playing the Connacht champions and playing a team which has been in six semi-finals in-a-row. My view is that Tipperary can aspire to coming back to this level on a regular basis providing we get things right and get total commitment. There are a lot of good footballers in Tipperary who were not available, so we need to get our set-up right back in the county. You would have to sit down with the Football Board and the County Board to discuss it - there are loads of things that I could say here, but this is not the forum for it.”

On playing teams at a higher level, Kearns said:

“We found it easier to play Division 1 teams and were more confortable playing them because we were able to play more football. We have no problem playing against them - we played Cork, Kerry, Derry, Galway and now Mayo and we didn’t feel inferior to any of them and put it up to them. If Robbie Kiely stays on the field and all our injuries are OK and there is no red card, then I think we would have no problem competing. I’ll leave it up to others to judge whether there is a gulf there because we are a Division 3 team and they are a Division 1 team. Personally, I don’t think that is the case.

“We concentrate on getting them to relax and play their game.

“Our backs have been to the wall all year but with every game they have gained in confidence and determination to do what they can do and bring what they can bring.

“They are an exceptional group because if Dublin, Kerry or Mayo lost the calibre of the seven players that we lost this year, I wonder how they would survive. But the players never made excuses - they just got out and played their football and got within a very close call of an All-Ireland final.”

Before returning to the dressingrooms, the Tipp manager briefly touched on what he had said to his players.

“We didn’t try to change the face of football - we tried to play it the way it should be played. I think we deserve a lot of credit for that,” conclued the first-year Tipp manager after the end of Tipp’s best football championship run in over eight decades.