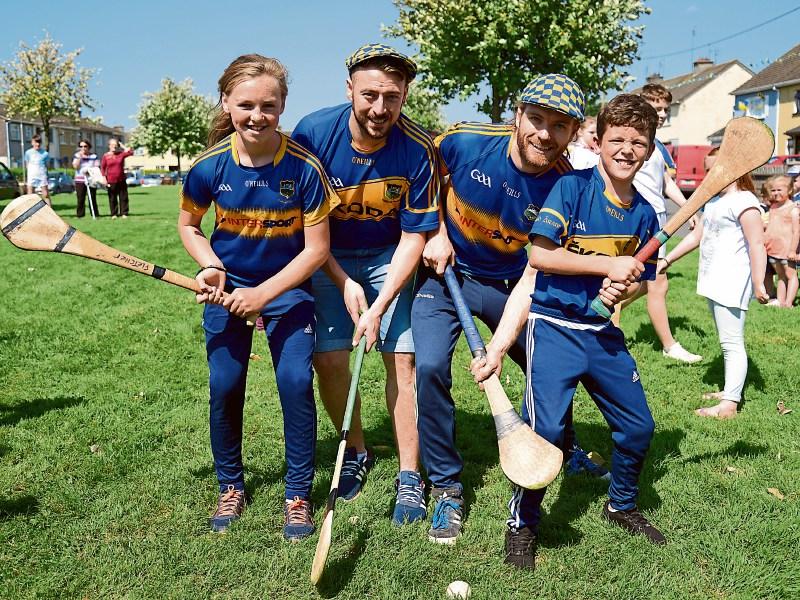 Cahir hurley-maker and musician Johnny B. O'Brien has penned another Tipp anthem to inspire the Premier County hurlers and electrify their legions of fans for the All-Ireland Final.

His latest Tipp All-Ireland song, 'The Premier Rap 2016' was an instant hit when it and the accompanying video were released online last week.

It received more than 150,000 views in the first 24 hours it was available on YouTube.

The rapid-fire rap, inspired by the music of House of Pain's 'Jump Around' is performed by Johnny B. and Johnny "Smacks" McMahon, who call themselves The 2 Johnnies.

The song is an updated version of Johnny B's original 'Premier Rap', which was brought out for the 2010 All-Ireland, the last time Tipp beat Kilkenny in the final.

"When we brought out the Premier Rap in 2010 we didn't realise it would be a success so this rap is a bit faster and more lively and works better if you hear it played on a night out. It's more bouncy in tempo, more made for bopping around to," explained Johnny B.

All the Tipp players get a mention in the rap's witty lyrics, which Johnny finished writing before the All-Ireland semi-final against Galway. Johnny B and Johnny Smacks began filming the music video the night of Tipp's one- point victory over The Tribesmen.

The music video for 'Premier Rap 2016' was filmed by Clonmel-based “Exit 8”. It was partly shot in Cahir House Hotel, at the Rock of Cashel, Lar Corbett's bar in Thurles and in Roscrea, with shots from Tipp championship matches also included.

The 2 Johnnies attracted a large crowd of curious tourists as they filmed scenes at the foot of the Rock of Cashel and many took selfie photos with the two rappers when they finished.

The main scenes in the video are shot in Johnny Smacks' hometown, Roscrea.

The residents of Kennedy Park in the town decorated their estate in blue and gold flags and bunting for the arrival of The 2 Johnnies, who played some hurling with the local children all proudly decked out in their Tipp jerseys.

"The kids gave me a few hard shoulders," laughed Johnny B.

They also filmed at Roscrea GAA Club, which was hosting a Cúl Camp the same week. A large crowd of club members and supporters turned up to be part of the video and among them were some local young musicians, who joined in the performance.

There is a great pre-match atmosphere at Johnny B.'s hurley workshop on the Tipperary Road in Cahir this week, thanks to 'The Premier Rap 2016'.

"People are coming in for photos and autographs, the craic is great here in Cahir. Whenever we go to Tipp matches the fans come up to us to have the craic. They can't get access to the Tipp players because they are concentrating on the match so we're the next best thing.”

The duo have a busy few days ahead of them in the run-up to the final on Sunday. They will perform 'The Premier Rap 2016' on the 'Dream for Liam' programme for Irish TV at the Horse and Jockey Hotel tomorrow (Thursday) and on Tipp FM's live All-Ireland preview show at the LIT campus in Thurles on Friday.

They will also perform the rap on RTE's Up For The Match show on Saturday night.

Win or lose The 2 Johnnies will perform the song for the Tipp players and their thousands of fans who'll gather in Thurles on Monday night to welcome the team home.

Johnny B. said he wished the Tipp team the very best on Sunday and is quietly confident they will bring home the Liam McCarthy Cup.

"I would have to fancy them. It will be close but Kilkenny don't have the bench they once had. And Bubbles is some man to play in tight spaces. He would score a goal in your pocket.”

As the music for The Premier Rap 2016 is a cover version of “Jump Around”, The 2 Johnnies won't be bringing out a CD of the song.

The 2 Johnnies will be posting video updates on their Premier Rap performances over the next few days, including a backstage film about their appearance on RTE's Up For The Match show.