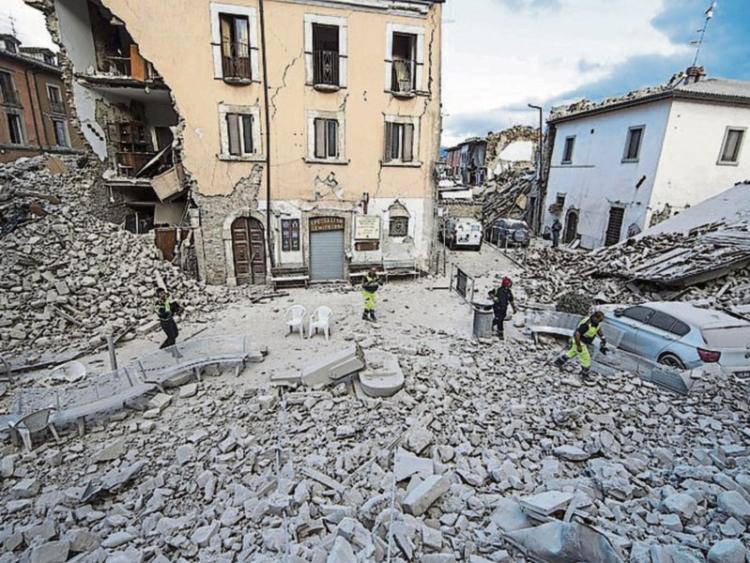 A Nenagh family caught in last week's devastating earthquake that left 291 dead have told how their legs turned to jelly when the second tremor hit.

Frances Doherty, from Gortlandroe, was staying about 90kms away from the epicentre and told the Tipperary Star that her house shook when the quake struck at around 3.35am (1.35am Irish-time) last Wednesday.

Frances was on holidays in the area with her daughter and her two grandchildren.

She said they had to sleep in their car for about four hours because they were afraid to go back to their house. However, she had to return later to find their passports as they happened to be coming back home the day after the quake struck.

“We are all safe and well, but I am still a bit shook,” she said.

Frances said that in the midst of it all, she and her daughter tried to keep calm for the sake of the children, but the children were excited and knew something was up.

The family got a few hours sleep in their car but before leaving it she said they watched the trees to see if theiy were moving.

Frances could not recall why she woke, but when she did the beds were rattling and there was an “eerie silence” in their village”.

“ I heard all the local dogs going wild. I thought it was wolves at the lake. The beds started shaking and the ground was moving. Our legs turned to jelly There was a second tremor. We didn't know how far away it was,” said Frances.

After a third tremor hit, they went to their elderly neighbour's house. The couple are in the 80s and have lived through a number of such earthquakes

“They were terrified,” she said. “They said that while you think it becomes easier to cope with quakes, it actually gets harder.”

However, while they were worried about the couple, she said it turned out that they were better for them at keeping them calm.

She said the fear now was that winter was coming and it would get extremely cold in the mountains. Residents will have to live in tents and already, some had moved into the local hall.

The magnitude 6.1 quake hit Amatrice and Accumoli near Rieti, some 80 miles (100km) north-east of Rome, though the quake was felt beyond the Lazio region into Umbria and Le Marche. It even registered on monitoring equipment in Dublin.

The centre of Amatrice was devastated with many buildings razed to the ground. Residents huddled in squares as aftershocks continued into the early hours, some as strong as 5.1.

In 2009, nearby L'Aquila was hit by an earthquake in which over 300 people died.

Frances pointed out that some of those victims of that disater were still living in makeshift homes called “cassetti” or “cabinet drawers”.