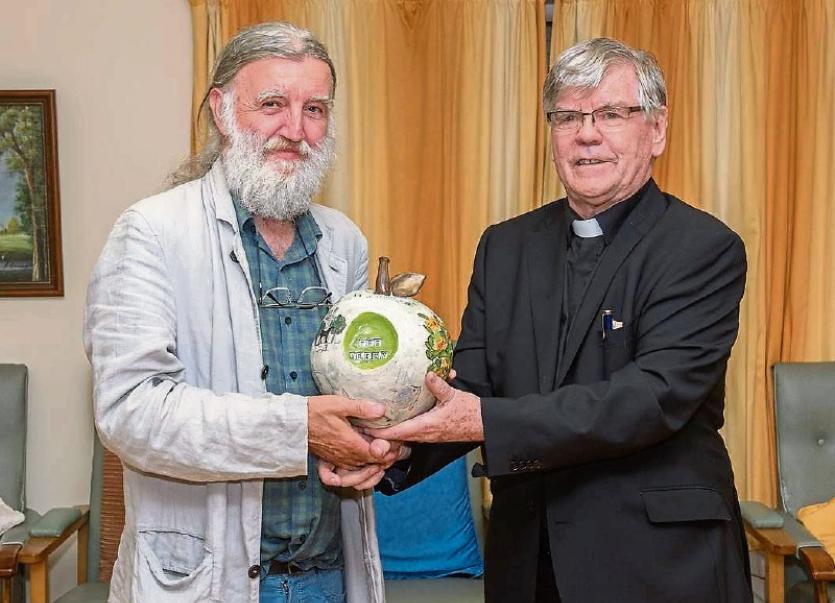 Fethard & Killusty Community Council made a surprise presentation to its former chairman, Joe Kenny, who has stepped down after sixteen years in the role.

Glowing tributes were paid to 'Mr Fethard' for his sterling work on behalf of the town and Community Council.

The presentation was to acknowledge his dedication and commitment to the Community Council during his sixteen year tenure as Chairperson.

He took on the role in 1999 and remained in the chair until the Annual General Meeting last year.

In this time, Joe was instrumental in steering and progressing the Community Council in becoming the well-structured organisation that it is today.

Indeed, this group is often recognised by local development agencies and others as being a model Community Council. This fact is due in no small part to Joe’s involvement and influence.

His ability, vision, know-how – never known to say “I’m not able” or “I can’t”; constant diplomacy and his immense interest in, vast knowledge of and pride in all things ‘Fethard’ have greatly contributed to the Community Council being so well respected.

Canon Breen said that on his own behalf and on behalf of the whole Community he wanted to offer sincere gratitude to Joe for what he has given, the efforts he has made and the commitment that was his over the past many years.

He continued by affirming Joe’s approach to the role, he brought a sense of easiness and peace, a sense of commitment and loyalty and a sense of genuine concern for everything that was good about the parish and community of Fethard.

In reply, Joe said that it was a pleasure to work with everyone in the Community Council, everyone pulled together which made things easy.

He said that they are a great group that work well and are successful in managing and sustaining many activities and projects over the years.

He acknowledged that this work continues as the focus moves on to a new dimension, mentioning in particular the Town Park and the Town Hall developments.

He concluded by saying that it was a pleasure to do the work and reminded everyone that while he had stepped down as Chairperson he hadn’t retired!

Members of the Community Council were joined by Kenny family members to mark the special occasion.

Joe was presented with an ‘Apple’ which had been thoughtfully created by local potter Doirin Saurus.

This unique piece was decorated with illustrations which represented aspects of Joe’s life. It was very much appreciated and liked by Joe.

On behalf of the members, past and present, of Fethard Community Council and also on behalf of the inhabitants of the parish let us take this opportunity to say Thank You to Joe for his dedication and leadership which he continues to give so willingly. Let us applaud you too Mr. Fethard; it is truly deserved.