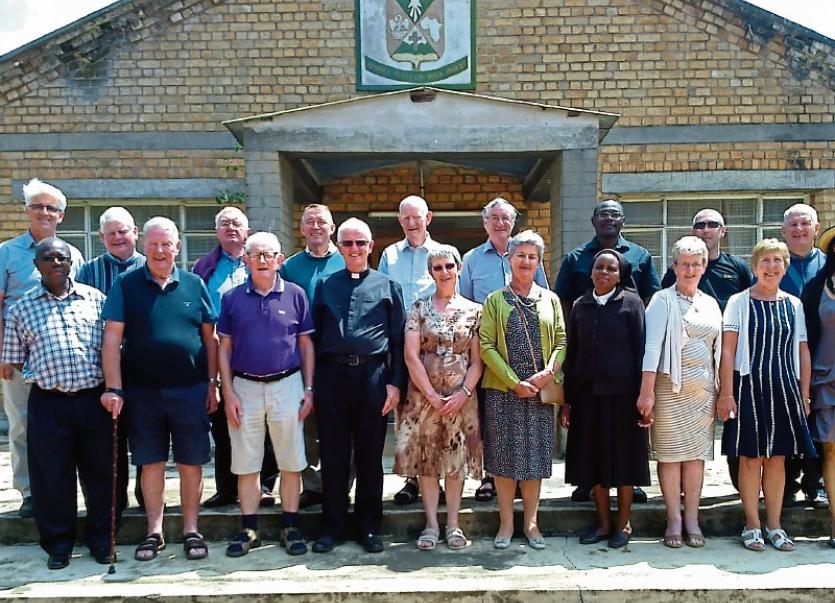 Twenty thousand people attended the Ordination of Holycross man Bishop John Ryan to the diocese of Mzuzu, with many friends and members of his family making the long journey for the very special event.

Bishop Ryan, originally from Cormackstown, Holycross was ordained a priest in Holycross Abbey and it was a great joy for him to have been chosen by Pope Francis to be Bishop of Mzuzu at a time when he was thinking of retirement rather than continuing his pastoral work.

And, following in the footsteps of the Pontiff, Bishop John's first act in his new role was to visit the prison and celebrate Mass and pray with the prisoners - there are currently 500 existing in a prison designed for 150.

Bishop John was joined by local priest Fr Conor Moloney, The Green, Holycross and Fr Celsus Tierney CC Holycross while Fr Michael Kelly, who is originally from Cashel and who was ordained at the same time as the then Fr Ryan, also made the trip. Among the family members who travelled were Bill, Tom, Percy and Peggy Ryan and their families.

Rev Professor John A. Ryan of St Patrick’s Missionary Society, is son of the late Mr and Mrs Pierce Ryan and his appointment as the new Bishop of Mzuzu in Malawi created real excitement in his native parish and amongst his family members including his brothers Martin, Pat, Bill, Percy, Tom and Pascal, and his sister Peg. He has two deceased sisters also, Anne and Mary. Bishop John was home during the summer and had received congratulations from all quarters having celebrated Mass in Holycross Abbey on a number of occasions.

Bishop John has spent almost forty years in Malawi and was head of the Mathematics Department, in the University of Mzuzu, where he specialised in coding theory. He succeeds Bishop Joseph Makasa Zuza, the president of the Catholic Bishops Conference of Malawi, who was killed tragically in a road accident in January 2015 after a decade in the position.

Bishop John was born in Holycross in 1952. He was ordained a priest in June 1978 - and was the first priest in 800 years to be ordained in Holycross Abbey, where he was also baptised and Confirmed. He is a past pupil of Scoil Ailbhe CBS primary school in Thurles, Thurles CBS Secondary School and St Kierans College in Kilkenny. Since his ordination he has served in academic and pastoral roles from 1978 to 2005 in St Paul’s parish in Mzimba (Mzuzu); St Stephen’s in Kapuro (Mzuzu); St Mathias’ parish in Misuku (Mzuzu); head teacher at the Community Day Secondary School in Misuku (Mzuzu); as head of the minor seminary of St Patrick in Rumphi (Mzuzu) and he also spent time teaching maths in Ireland.

From 2000, he served as chaplain to the Holy Rosary Sisters in Katete; and between 2005 and 2011 he ministered as a chaplain at the University of Mzuzu where he also worked as professor of mathematics; he also served as assistant chaplain of St Augustine and its outstations and as a member of the college of consultors.

The Prefecture Apostolic of Northern Malawi was erected in 1947, and was elevated to the status of the Diocese of Mzuzu in 1961. It currently has a Catholic population of 400,000. The diocese comprises the northern districts of Rumphi, Mzimba, Nkhata Bay and part of the central district region of Kazungu. In total Bishop Johns diocese has 11 parishes.

The five hour ordination ceremony featured song and dance and was attended by the Papal Nuncio and Mr Pat Fitzpatrick, a retired Professor of Mathematics from UCC who had assisted Bishop John with his PHd some years ago. Rosarie Griffin from UCC, who was working in the area at the time on another project, also attended - she is niece of a neighbour of the Ryans in Cormackstown - Bernie Moylan.

“It was a magnificent occasion and a real privilege to have represented the parishioners of Holycross. It was very historic and as Bishop John said himself, his three families were there - his spiritual family, his parish family and his own family,” Fr Celsus Tierney told The Tipperary Star this week.

The Ordination ceremony took place primarily through English and followed the same format as we would be used to here, apart from the inclusion of local song and dance, and the huge crowd. Such was the congregation, that the ceremony took place in a local stadium and it was very touching to see people who have little giving presents of congratulations to Bishop John - the people are known for being generous to a fault and among the gifts he received were goats and cows. Malawi is known as the 'warm heart of Africa' and that warmth was certainly apparent to those who made the journey to be with Bishop John at the start of his new journey.

Bishop Ryan is to be congratulated and wished well in his very challenging role.