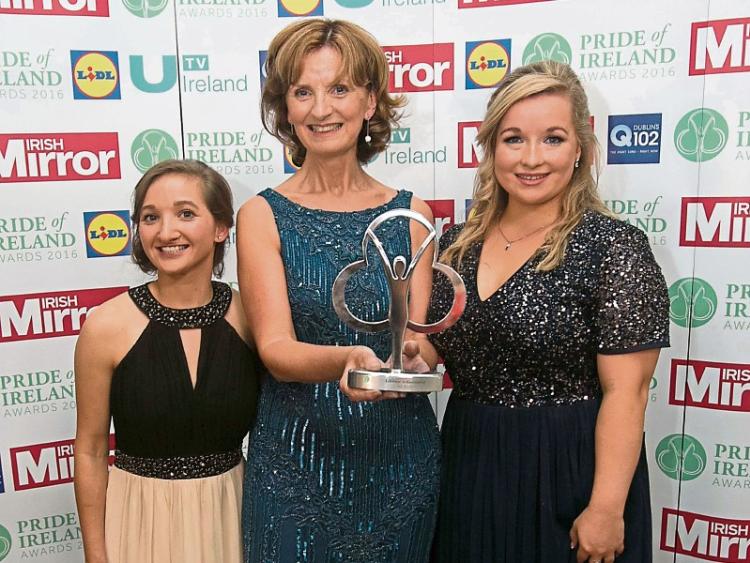 Tipperary's Adi Roche has won a 'Pride of Ireland' Lifetime Achievement Award for helping tens of thousands of children affected by the Chernobyl nuclear disaster in 1986.

The Clonmel native picked up their Pride of Ireland gong on Monday evening (Sept 12th) at the star-studded Irish Mirror awards event.

The big-hearted humanitarian founded Chernobyl Children International (CCI) and dedicated her accolade, presented by Raisa Carolan and Anna Gabriel whom her charity has helped resettled in Ireland, to her troop of volunteers.

“We have an army of volunteers of all ages and from all counties in Ireland. They are the lifeblood, they are the boots on the ground, and they are the frontline people who help to make it happen. They are the veins that run through the charity. “We are like a family and I may be the mother hen but I couldn’t do anything without them.

Adi added: “This award is like a beacon of hope on the 30th anniversary of Chernobyl Children International. This says to the victims and survivors that the people of Ireland will never forget them.”

It was the third year of the spectacular awards, sponsored by Lidl Ireland and presented by Amanda Byram. A special programme, to be broadcast on UTV Ireland on Sunday, September 18 at 7.30pm, has captured all the emotional moments of the event.

Chernobyl Children International (CCI) was establlished in the aftermath of the devastating 1986 nuclear disaster. Adi has been the driving force behind what started as a small fundraiser, escalating into a humanitarian organisation that has raised €100m in aid. When she first heard about the catastrophe Adi began to host tea parties to raise money for those suffering from the devastating effects of the nuclear blast. But she soon felt she needed to do more to help, especially for the children left with serious health consequences as a result.

Adi initially went over to Chernobyl with other volunteers from UNICEF, intending to donate items and to bring money to the devastated region, but she ended-up staying for six months and giving aid to more than 10,000 people.

She has travelled the world to continue shining a light on the plight of the Chernobyl children, giving inspirational talks at the UN. Her unshakeable passion and steadfast determination has ensured that those still living with the horrific effects of the nuclear blast are not forgotten.

Under Adi’s leadership the CCI has grown to become an organisation that has helped 25,000 children enjoy recuperation in Ireland as well as providing 3,500 life-saving cardiac surgeries over the last 12 years, in addition to a host of other life-changing programmes.

In a bid to raise awareness Adi also collaborated with friend Ali Hewson to bring the documentary Chernobyl Heart (2003) to the big screen. The Oscar-winning film takes a look at children born after the disaster with deteriorated heart conditions.

In recognition of her outstanding humanitarian efforts Adi’s Pride of Ireland award will join a clutch of accolades that acknowledges her lifetime of devotion to the children of Chernobyl.

Judges’ opinion: “Adi has spent a lifetime tirelessly helping the children of Chernobyl. Having founded the Chernobyl Children International (CCI) Adi has spent nearly 30 years passionately campaigning on a global scale for those affected by the nuclear disaster. She has brought joy into the lives of thousands of children and has ensured they aren’t forgotten by the world.”