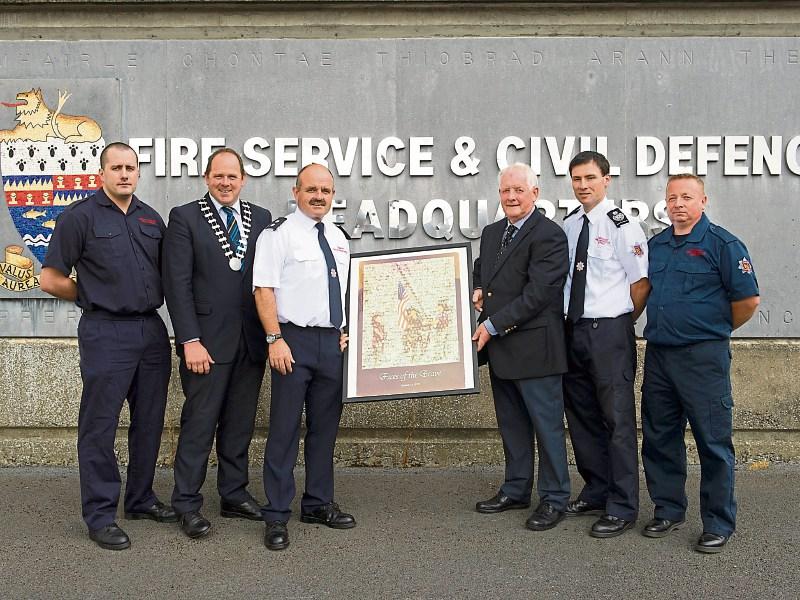 The gesture of solidarity and support that Clonmel firemen made with firefighters in New York in the aftermath of the terrorist attacks on the World Trade Centre was recognised on the 15th anniversary of 9/11.

Former Mayor of Clonmel Niall Dennehy was joined by his first cousin, current District Mayor Andy Moloney, when he presented a copy of The Faces of The Brave portrait to Stephen McEvoy and fellow firefighters at Clonmel fire station.

Stephen was one of the local firemen who travelled to Manhattan to help their counterparts in New York following the terrorist attacks in 2001, which claimed the lives of almost 3,000 people.

The victims included 450 members of the emergency services and they are remembered in The Faces of The Brave artwork, a photo mosaic comprised of individual portraits of each of the fallen heroes.

Many of the images in the print, which was created by Las Vegas artist Randy Soard, are from private family collections and had never been viewed in public.

Niall Dennehy was presented with the portrait on a visit to New York some years ago. Sixteen of the firemen who perished in the disaster were based at the Engine 40/Ladder 35 station in Amsterdam Avenue and were regulars in the nearby pub owned by Niall's first cousin, Paul Dennehy Hurley.

Paul is originally from Finglas, Dublin and his mother is Clonmel woman Phyllis Dennehy, who is Niall's aunt.

On a visit made in a private capacity to New York a year after 9/11 Niall Dennehy, then Mayor of Clonmel, expressed the condolences of the people of the town to the firefighters and the families of all those killed in the tragedy.

He was presented with the portrait on another visit to New York some years later.