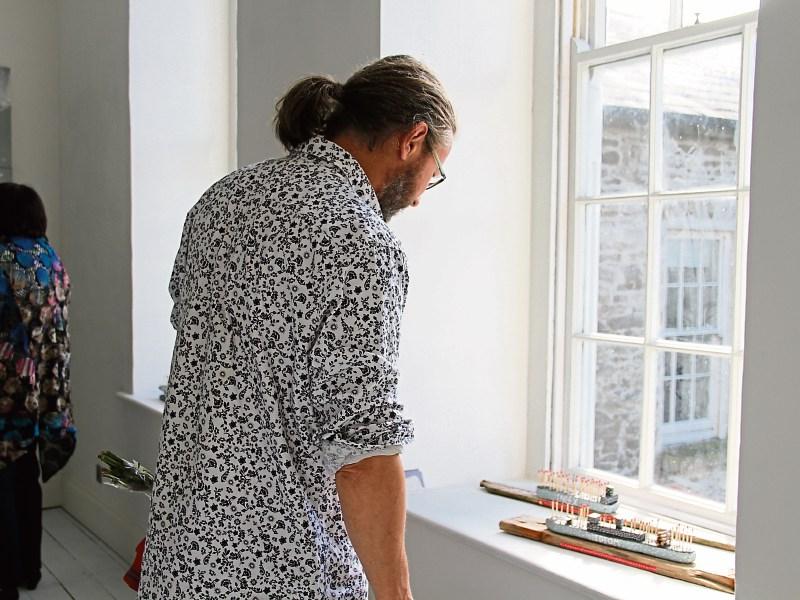 As an island nation, boats are in our DNA. Even away from the coast, we are never too far from water, be it lakes, canals or rivers.

The Bronze age longboat the so called ‘Lurgan Canoe’, which measures 14m in length, on display in the National Museum, is carved from a single oak tree and was probably carved for ceremonial use.

Also in the museum is a group of gold objects from the Iron Age, the Broighter Hoard which includes a tiny gold boat (7cm), complete with oars and steering rudder. The hoard is likely to have been a votive deposit to the Celtic sea god Manannán mac Lir. These artefacts are a powerful indication of our affinity with boats and water, and a tangible link to our early seafaring ancestors. Boats and the sea are part of us and are a constant reminder not just of our vulnerability but our courage and resilience. The group exhibition currently running in Damer House Gallery entitled 'Bád' brings together six artists working in various media and all dealing with the theme of boats. Each of the pieces on display recall journeys of boats, their cargos and people, personal journeys and journeys of the heart and soul. Boats, ships and the ports they sail from have a particular meaning in Irish memory. They are strong reminders of our emigrant past in a similar way that airplanes and airports may remind us now of our emigrant present. Patricia Hurl’s Heart in Chest :fuair sí bás de chroí briste (she died of a broken heart), refers to her mother who died her father said, of a broken heart after her son left for Canada in 1954 and who did not return in his mother’s lifetime.

As Patricia says “this is surely the history of the world”. Patricia McKenna’s piece Cargo references the opening up of the world through boats, the exchange of objects, ideas, music, language and crops, it could also be a metaphor for the dangerous journeys of migration, which people are undertaking now. Where once our ancestors fled famine in so called ‘coffin ships’, now our navy vessels rescue migrants from a different kind of ‘coffin boat’. There are references too in this exhibition of personal journeys, journeys of the soul. Therry Rudin’s tiny boats, isolated as they are under glass domes may refer to the journey of the artist which is at once isolated (the process and creation) and open (the display).

FX Murphy wants to ‘create his own nation’ which he says requires an army but he notes on that on an Island, a navy would be better. His pieces are playful but also very serious in the intent.

'An Idea For A Fireworks Display' are paintings of war boats (the title is self-explanatory) and How goes it with the glorious gods? represents a votive to the sea gods, made with safety matches on driftwood. When you are in a boat your fate is in the lap of the gods and the materials used suggest this vulnerability.

Fragility and vulnerability is also something which both Bernadette Burns and Siún Hanrahan express in different ways in their exhibits. Burns who lives and works on Sherkin Island, uses the idea of a boat, a ladder, some cloud to express our human fragility. The boat is a metaphor for the human body, the vessel in which we travel through life, always searching for something higher. The ladder which invites us is ‘a fragile thing, constructed of dreams and of hope’ Hanrahan’s work is she says ‘in conversation with the work of Bernadette Burns in the first instance’ and unfolds as a conversation with the wider exhibition. The boat as metaphor is explored in this exhibition in a variety of ways but what comes across in all the works is that while the human spirit is a fragile thing, it can also be unassailable.

This exhibition, which was opened by Helen O ’Donoghue Senior Curator, Creative Engagement and Learning, IMMA, continues until September 28th, when Damer House Gallery will close for the Winter season.