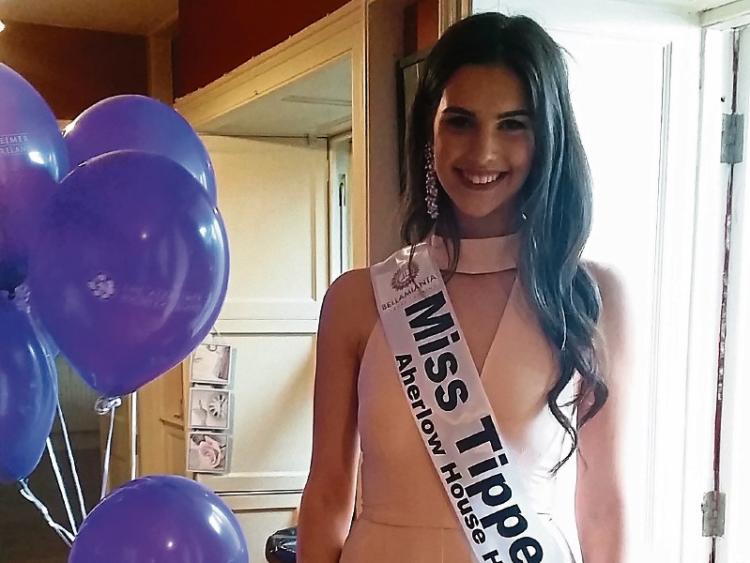 Portroe’s Niamh Kennedy and Cork’s Sinead Connery, whose father hails from Tipperary Town, will join 35 other glamorous ladies in Dublin this Friday to vie for the 2016 Miss Ireland title.

“It’s been an absolutely amazing experience so far. The things we’ve all got to do and see so far have been unbelievable. I wouldn’t take it back for the world it’s been so much fun,” says 2016 Miss Tipperary Niamh Kennedy who has recently signed with Asset’s Modelling Agency.

And as well as fulfilling all her Miss Tipperary duties, the 22 year old International Finance and Economics’ student was also behind a hugely successful fundraiser last Saturday in her home village of Portroe for a cause close to Niamh’s heart.

“My father was diagnosed with early on-set Alzheimer’s in 2001 and passed away five years ago. Throughout it all the Alzheimer’s Society of Ireland was a tremendous support to our family so I was honoured to be able to organise a fundraiser event for them.”

And while Niamh admits she had felt nervous during the interview rounds when she was crowned Miss Tipp back in May, her many dealings with the media since then have left her confident she can handle any questions the judges throw her way at the final.

“I’ve had plenty of practice of public speaking since I won and I spoke in front of 150 people at my fundraiser on Saturday, something I wouldn’t have been comfortable with before, so I’m quite positive about going up on stage in front of the judges. I’m just trying to take it all in my stride and have a great time,” she says.

Meanwhile paediatric nurse Sinead Connery will also be flying the Tipperary flag in Dublin as Miss Tipperary South after securing her place at the semi final round in July.

The 22 year old CUH intern, whose father Liam is originally from Tipperary Town but now living in Cork, says winning a place in the final has been a “dream come true” for the long time Miss Ireland fan.

“I followed Miss Ireland for years but I wanted to wait until I was a bit older and had more life experience to enter,” says the aspiring model who is signed to Cork based agency Lockdown Models.

“I’m delighted to be representing Tipperary. I spent a lot of time there growing up visiting cousins so I hope I can bring the crown back to Tipp,” says Sinead who adds she hopes to be able to juggle her nursing and modelling careers into the future.

“Nursing is a versatile job and it's something I always knew I’d do but I'm also really interested in pursuing modelling so I’d like to continue both into the future. The pageant has been a great way to get my face out there and I’ve met loads of wonderful people so far.”

“I am nervous about the final but I’d describe it as excited nerves which I’m hoping to transform into positive energy on Friday. It will be a great experience regardless,” she laughs.