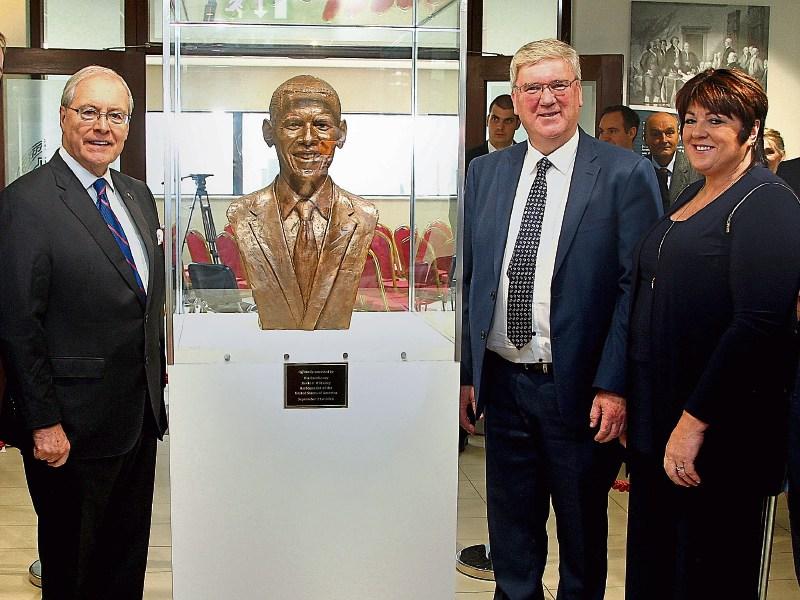 On Wednesday September 21st US Ambassador to Ireland Kevin O'Malley unveiled a bronze bust of Barack Obama at the visitor centre at the Obama plaza in Moneygall, Co Offaly to mark the US President's historical connection with the village.

President Obama is the great-great-great grandson of Falmouth Kearney, who left Moneygall in 1850 at the age of 19.

According to Henry Healy, eight cousin of the President Obama, who manages the Barack Obama Plaza “We tell the story of the Irish in America, and especially our influence on the Presidency. Of the 44 American Presidents, 22 have Irish ancestry” .

The President visited the village and the Kearney ancestral home in 2011, along with his wife Michelle.A visitor centre with mementos and photographs of President Obama's connection with the village and recalling his visit there, is now open at the plaza located off the M7 motorway.

Speaking at the centre, Ambassador O'Malley said President Obama speaks frequently about his visit to Ireland and the great welcome he got here and it’s a place very close to his heart.

He said he believes the President will revisit Moneygall in the years ahead, once he has completed the busy schedule of the remainder of his presidency which ends next January.

The bust was made by sculptor Mark Rodes and commissioned by Supermacs Founder, Pat McDonagh, owner of the Obama plaza.

“We were honoured to have the American Ambassador here to unveil this wonderful piece, it is a landmark day for us here at the plaza given the fact that it is now 5 years since we welcomed President Obama and the first lady to the village” said Pat McDonagh who also paid tribute to Mark Rodes, who is no stranger to sculpting famous Americans. Mr Rodes who is based in Swinford also sculpted the well know John Wayne bronze statue in Cong Co. Mayo.

The rest of the exhibition at the Barack Obama Plaza focuses on the four Presidents with strong Irish roots: Obama, Bill Clinton, Ronald Reagan and John F Kennedy and there is already a bronze bust of JFK on display.

The Barack Obama Plaza has been opened since mid 2014 and since that time has become a renowned rest stop on the M7 between Dublin and Limerick.