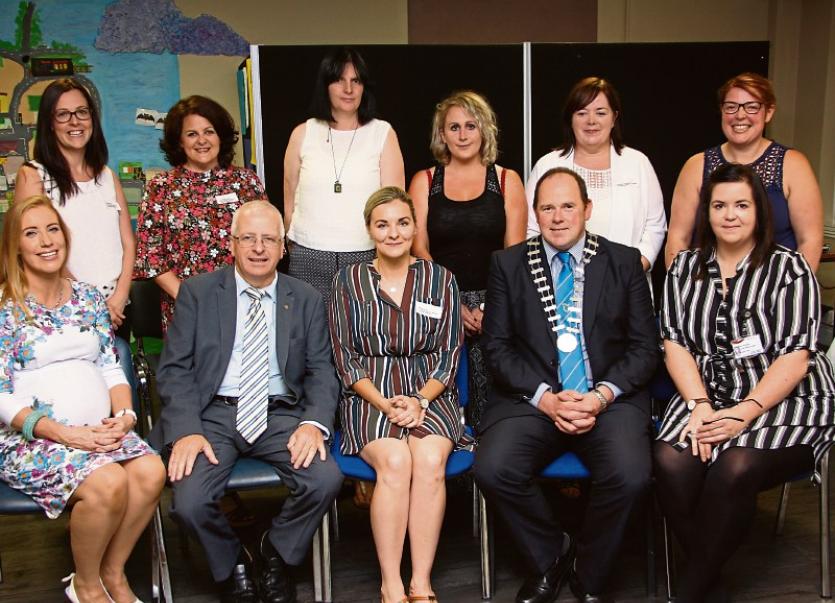 A sense of fulfillment immersed Bridgewater House in Clonmel recently as RehabCare Resource Centre and The Suir Drop clients were presented with certificates for taking part in the ninth annual Job Shadow Day last April.

Over 60 people attended the joyous celebrations, including community support workers, friends, family, representatives of host employers, and Mayor of the Clonmel/Cahir Borough District Cllr. Andy Moloney who acknowledged the proud participants for their endeavours.

The arrival of Independent TD Mattie McGrath ahead of proceedings garnered a cheer from the crowd, before Miriam Cleary, community services manager of RehabCare Resource Centre and The Suir Drop Service Clonmel, spoke of the "huge effort" that community support workers Mary Simpson and Orla McNamara put in to make Job Shadow Day 2016 a great success in Clonmel.

RehabCare’s Mary Simpson and The Suir Drop’s Orla McNamara registered both centres respectively as Supported Employment Organisations with the Irish Association of Supported Employment (IASE), enabling those who use these services to participate in Job Shadow Day 2016, a national day of awareness to promote equal employment opportunities for people with disabilities.

In early March last, on checking in with the IASE, Mary and Orla learnt that no employers in the Clonmel area had registered to partake in Job Shadow Day.

Mary and Orla realised they had a battle on their hands to entice workers into expressing their commitment to inclusion in the workplace. Much of March and April was spent driving around the locality visiting businesses, making phone calls, sending emails and following up potential host employers.

Mayor Moloney praised the “formidable group” for making the initiative a success and encouraged more employers to get involved next year. He then presented participants with their certificates, providing humour throughout the conferral, smiling for photographs and engaging with the crowd.

Speaking to The Nationalist after the event, RehabCare’s Mary Simpson said the feedback from participants and host employers was “extremely positive”.

She pinpointed Job Shadow Day as a great opportunity for networking with local businesses, and highlighted the valuable contribution that people with disabilities can and do make in the work force. “As a result of participating in the initiative, a number of employment opportunities have been created. Tesco Clonmel, who fully embraced the ethos behind the Job Shadow initiative and who actively promote equal employment opportunities for all, have continued to work in partnership with RehabCare Clonmel to offer ongoing employment to their service users,” she highlighted.

Mary also thanked the committed staff at RehabCare and The Suir Drop, congratulated all the participants and employers who took part, and extended appreciation to photographer at the occasion, Patsy Hartigan.