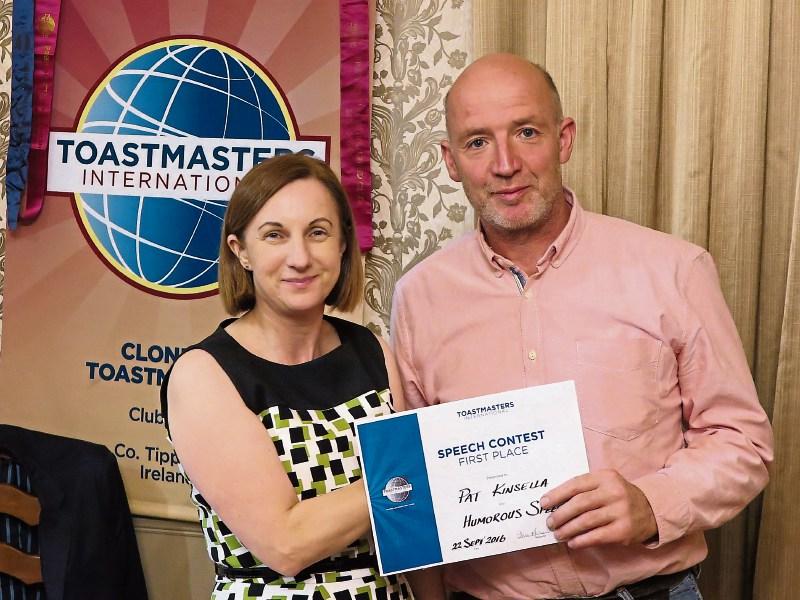 Clonmel Toastmasters Club held its Humorous Speech contest, where speakers give a prepared 5-7 minute speech on a topic of their choice.

The club also held its Table Topics contests, where contestants speak for a minute to two minutes and thirty seconds on a selected topic – not of their choice.

Both contests were enjoyed by an attendance of over 30 people. Congratulations to all eight participants, those brave people who stood up to compete, with a range of speaking and delivery styles.

The competition was tough and the judges had a difficult task, while the audience was kept fully entertained.

During the meeting others, not taking part in the contest, tried their hand at speaking on the spot about a chosen topic, while the results were awaited.

Pat Kinsella won the Humorous Speech Contest and the runner-up was Richard Walsh.

In the picture above Pat is presented with his certificate by Anna Marie O'Dwyer.

The Table Topics contest winner was Jim Keating and the runner-up was Frances Cahill.

Pat and Jim will represent the club at the Area Final, where the winners from all five clubs in the area will compete to qualify for the District Final.

Thanks are extended to all who helped to run the contest.

The next Clonmel Toastmasters meeting will be held on Thursday 13th October at Raheen House Hotel at 8pm.