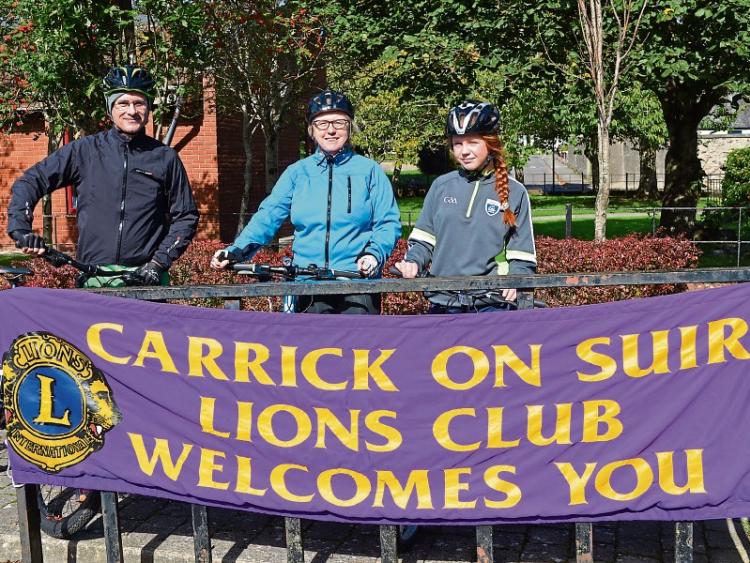 Bad weather forced the cancellation of Carrick-on-Suir Lions Club's popular annual Art In The Park competition for children at the weekend but the Club's family cycle went ahead as planned.

The two events were part of the Lions Club's Family Fun Weekend of free events.

Heavy rain and wind throughout Saturday meant the chalk art contest on the paths at Town Park for children aged between 4 and 14 didn't go ahead for the first time since the annual Family Fun Weekend was started by the local Lions Club four years ago.

Lions Club members and their families gathered at St Nicholas Church in Carrick on Saturday evening for a Mass to remember deceased members of the Club. The Suir Valley Choir performed at the ceremony.

Thankfully the weather conditions were good on Sunday afternoon and the Family Cycle went ahead as planned. About 30 cyclists departed from the Library Car Park in Carrick at 2pm and stopped for an ice cream break in Faugheen before returning to Carrick.

"We were very disappointed with the weather on Saturday and I think it affected the numbers who turned out for the Family Cycle the following day," said Lions Club member Stephanie Keating.

The Club plans to run its Family Fun Weekend again next September and has a busy autumn season ahead. The Club has notified local schools of its upcoming annual Peace Poster Competition and will run its annual Youth Awards Competition that recognises the work of young volunteers in the town in November.

Stephanie Keating said the Lions Club is also sponsoring a respite break for three full-time carers at the Ballyvalloo Centre in Co. Wexford between October 14 and 16.

The Club's monthly meeting took place at the Old Mill Pub at New Street, Carrick last week where members presented the Melvin Jones Award to the bar's proprietors Tommy and Maudie Walsh in recognition of the support they have given the club. The Old Mill has been the venue for the Club's meetings for many years.