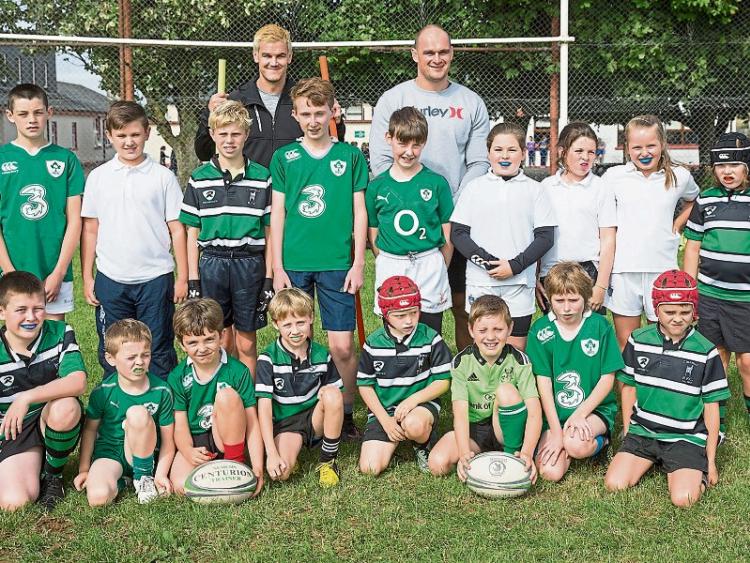 There was great excitement among the staff and children of Grange and Rathkeevin national schools when they received a visit from Leinster and Irish rugby stars Johnny Sexton and Rhys Ruddock.

The players arrived at Grange National School, where they were greeted by children from both schools.

Grange school was also delighted to welcome past pupil Jean Lonergan, who played international rugby for Ireland. Clonmel High School teacher Jean was on the Irish team in the Rugby World Cup in 2002 and 2006, when she scored a try for Ireland against Australia.

The visit was organised in conjunction with local company Sepam, who were the highest bidders for the visit at a charity auction at the annual reachout.com gala ball last November.

The excitement began with a training session for the children. Johnny and Rhys put the children through their paces, demonstrated some lovely kicks over the goalposts and encouraged the children as they attempted their own kicks.

The school communities subsequently gathered in the GP room, where all the children welcomed the stars with a rousing rendition of “Ireland’s Call”.

Grange NS principal Marie Keating welcomed Johnny and Rhys and thanked Sepam and Marine Kearney for giving both schools an afternoon to remember.

She also spoke about Grange’s past pupils who have been successful on the rugby scene - Irish international players Tommy O’Donnell and David Foley; Munster's David Johnston, who also played for Ireland at underage level; his brother Bill Johnston, who played for the Irish U-20 team that beat New Zealand in this year's World Cup; former Munster and Irish player Mollie O’Donnell and former Irish women’s player Jean Lonergan.

Rathkeevin Principal Pat O’Brien was also delighted to welcome the players and he thanked Sepam for the wonderful opportunity this presented for the children.

Rhys Ruddock and Johnny Sexton thanked the children for the wonderful reception and for making the visit so memorable and enjoyable.

Rhys took some time to explain the background to the visit and to promote the charity reachout.com.

“Johnny and myself have had a great day. The welcome we received here today from the children, parents and teachers alike was very special. It’s great to be part of something like this and support reachout.com in helping to create memories for the children, which will hopefully be happy ones for years to come.

“Reachout.com is there to help young people lead happy and healthy lives by giving them support, tips and tools to look after their mental health and wellbeing as they grow up. Getting out and playing sport is great for keeping us physically fit ,but importantly it has huge benefits for our mental fitness too.”