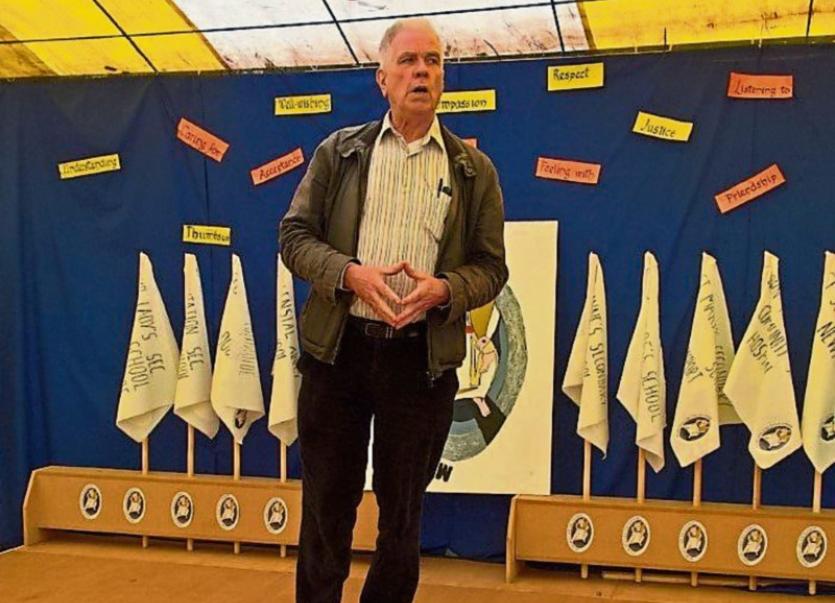 “When you serve the poor, help the suffering or those in need, God will find you.”

This was the message at the heart of Fr. Peter McVerry’s presentation at a gathering of Transition and Fifth Year students from the secondary schools throughout the Archdiocese of Cashel and Emly, and students from Presentation Secondary School Mitchelstown, in Holycross on Tuesday 20th September.

The day, which was organised by the Diocesan Mercy Committee, provided an opportunity for close on a thousand young people from throughout the Diocese to come together to share their faith and be challenged by the Gospel message as lived out in the lives of those who generously shared their journey in faith and by Fr. Peter Mcverry who shared his journey as he walked alongside the homeless and the needy.

The choir from Our Lady’s Templemore, led the singing while Kevin Bracken, Thurles CBS accompanied students from Presentation Ballingarrry, on the Clarinet as they dramatised the story of The Good Samaritan.

To accommodate the numbers there were two sessions.

At the first session Eimear Fitzgerarld, Home Economics teacher at Presentation Secondary School, Ballingarry, shared how important her faith was to her and how acting as a volunteer in Lourdes, assisting with Special Olympics and attending World Youth Day earlier this year were all opportunities to put her faith in action.

Eimear encouraged those gathered to remain true to their faith.

In her talk Eimear acknowledged the role of her parents in terms of nourishing her faith.

In the second session Ciara Ormond, a Geography, English and Resource teacher from Roscrea, shared the story of her work in Ghana and how, in the midst of poverty and deprivation, she found herself both challenged and renewed by a God, who had brought her to this place to serve the people she found there, not as she would like them to be, but exactly as they were even when she found their customs and traditions unfathomable.

This message of service and love and seeking out the vulnerable and the lost was further developed when Fr. Peter McVerry addressed the gathering.

He began by highlighting how the homeless people he has met over many years have radically changed him and have challenged his prejudices, values and relationship with God.

His stories of the people he has met over the years gave the students true insights into the lives of those most of us just pass on the street, without as much as a cursory glance.

Behind every face, under every sleeping bag is a story and some so horrific that irreparable damage is done.

He told the story of a twelve year old whose alcoholic mother stabbed his twelve year old sister in front of him and how this young boy, so traumatised by the event, now lives with mental health issues in Peter McVerry Trust accommodation.

He also told the story of a fourteen old boy who every night was forced by his parents onto the street to prostitute himself in order to make money to feed his parents' drug habit.

It wasn’t until this boy arrived at Fr. Peter’s door one night that he found refuge.

His stories of homelessness were not all negative as there are some great success stories with former homeless residents graduating from Trinity and UCD while others have won sports scholarships to California.

In spite of the hope Fr. Peter offers, the trap of addiction is not an easy one to escape and one of the most heart wrenching sentences he shared was a line a girl said just before she died,

“Wouldn’t it be wonderful,” she said, “if you could run so fast your memories wouldn’t catch up?”

“Surely,” Fr. Peter added, “if there is a God then these people must have a special place in His heart.”

And so Fr. Peter went on to share how he had three images of God and each image portrays God as a loving, devoted parent whose only concern is for the child in need.

“This is what God wants us to do,” Fr. Peter added, “he wants us to reach out to those in need and suffering and then God will come to find us, as a parent would find the one who saved their child from drowning and in being found we will then know that God exists.”

He concluded by stating,

“The poor offer us the chance to become more like God and we are the hope of the homeless and the needy.”

The day ended with a question/answer session during which Fr Peter spoke of the ravages drug addiction inflicts not only on the user but on their family.

He also added that if he had his life to live over again he would do the exact same work.

So as Peter made his way to his car with his ever faithful companion, his Jack Russell, you couldn’t but feel that you had been in the presence of someone very special whose life bears true witness to the Gospel message to feed the hungry, cloth the naked and seek out the lost.

This, the first gathering of young people from the Diocese was truly inspirational.