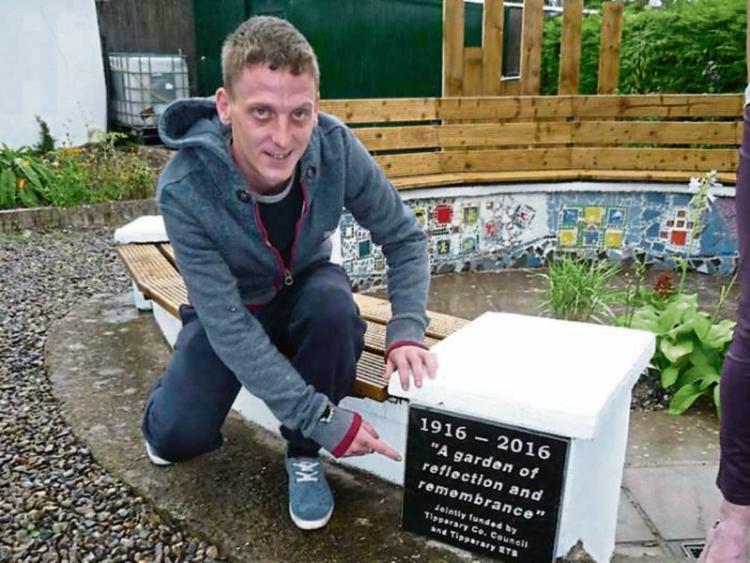 A former student has marked the 25th anniversary of the Knockanrawley Resource Centre in Tipperary Town.

Cathal Price returned to Knockanrawley to create a mural in a 1916 commemorative garden for the 25th birthday celebrations.

He put the skills he learned on a Local Training Initiative (LTI), which is funded by Tipperary ETB, to good use.

Cathal was a participant on the 2015/2016 LTI programme and very generously gave up his free time to create a beautiful mural on the wall in the garden.

Cathal discovered his love of art on the LTI’s KITE programme Pathways to Employment educational course which included a painting module.

The tutors ensured that his passion was nurtured and developed throughout the programme. He designed the piece as a gift back to the centre in appreciation of the opportunity he got while on the LTI.

He now offers his skills to the wider community and is hoping to make a career out of his passion.

Programmes such as these LTIs, operating in Knockanrawley and funded by TETB Training Services demonstrate the benefits students and the community obtain from participation on educational programmes.

Funding for the garden was obtained from Tipperary County Council and with education programmes such as the LTI and Back to Education Initiatives (BTEI) provided the learners.

The inspiration for the garden came from the learners and included four elements, the seating area, the water feature adding a therapeutic element, the mural and the planting.

Present at the 25th Birthday and official opening of the commemorative garden to join in the celebrations were staff from Tipperary ETB, LTI coordinators, staff, tutors, friends and family of the centre.

LTI Coordinators Josephine O’Donnell and Trish Power took the opportunity to thank the people who helped bring this project to fruition. .