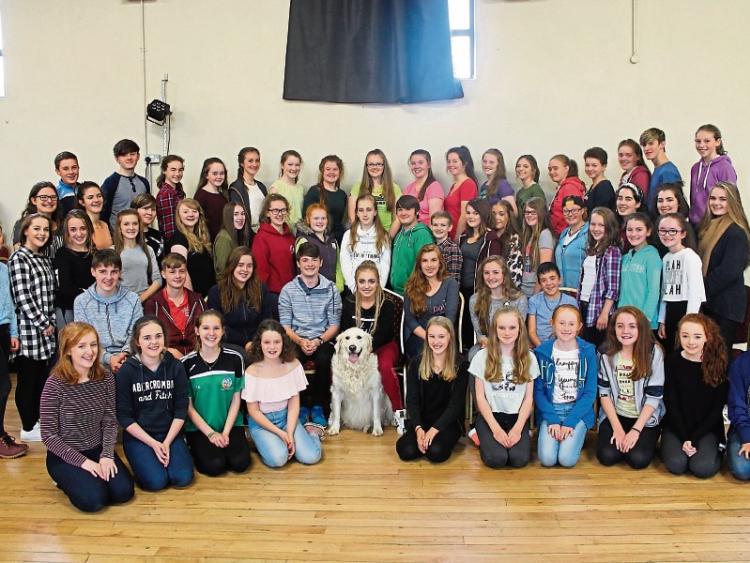 The young members of Nenagh Choral Society are al set to let the sun come out tomorrrow and for thet next few days as they stage the musical Annie: The Musical in the Scouts Hall.

The 70-odd cast members, who range in age from 12 to 18 years, have been rehearsing for their show since July.

With opening night only a day away, the cast has been busy putting the finishing touches to their costumes, makeup and on stage performances to create a show that is not only visually and musically effective but also a display to the people of Nenagh what talent and dedication they have to the Nenagh Choral Society.

Megan Maher, a very talented third year student who has starred in other choral society productions, brings fun and life to the stage, stars as Annie.

Transition year student Caroline Browne, who joined NCS in 2008, plays the feisty yet entertaining character of Miss Hannigan,who runs the orphanage where Annie and her friends live.

Colin Dillon from Silvermines is no stranger to the stage and is thrilled to take on the strong role of Daddy Warbucks" a powerful man whose softer side is brought out by the lovable Annie.

Anna Conway joined NCS last year and is thrilled to play the cheeky role of Lily, Rooster's girlfriend who, just like Rooster, will do anything for a few bucks

Making his debut is 15-year-old Luke O'Gorman, as the charming Roosevelt, America's president who is encouraging the people to see a bright light during the tough times.

But surely one of the stars of the show will be Prince, the golden retriever who plays Sandy. Prince will make his stage debut, and, like Annie, he was an orphan until taken home by his owner Bridie McGee.

Back in 2010, Nenagh Choral Society made the decision to invest in the youth of Nenagh and decided to stage a youth production, along with its yearly production, as the youth are the future of society. Annie: The Musical runs from Thursday, October 6, to Sunday, October 9, at 8pm in the Scouts Hall, with a matinée performance on Sunday at 6pm. The box office is open in the Scouts' Hall, or call 086-3122725 to book your tickets. Adult tickets cost €15, with child tickets at €10.