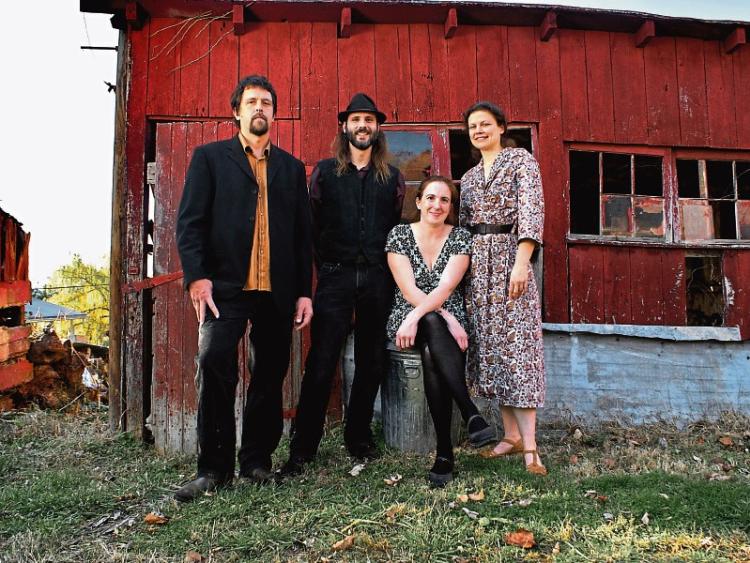 Clonmel World Music is back on Wednesday 19 th October in Raheen House Hotel, following on from the great success of the Eddi Reader gig last month. They are delighted to welcome one of the best Americana bands for their first visit to Tipperary. Furnace Mountain are a great Roots band from Virginia USA. The Coen Brothers are among this bands biggest admirers !

Though often overshadowed by Southwest Virginia and its famed Crooked Road, the Shenandoah Valley and Virginia’s northwestern counties have always been fertile ground for traditional music, and they continue to be home to many of its finest practitioners. The region is situated between the Appalachian hills of West Virginia and the culturally diverse and ever-changing Washington, D.C., metropolitan area, and is known for producing musicians who transcend generic categories, deftly taking traditional music styles in new directions. Furnace Mountain, named for a mountain near where all the members grew up, consists of some of the most innovative and gifted musicians in Virginia. With Aimee Curl on bass and vocals, Danny Knicely on mandolin and fiddle, Dave Van Deventer on fiddle, and Morgan Morrison on guitar, bouzouki, and vocals, the band creates music that is at times lively and raucous, with spirited fiddle melodies weaving in and around the powerful rhythms of the bass and bouzouki, and other times poignant and poetic, with sublime vocal harmonies beautifully interpreting some of the oldest songs ever written.

Furnace Mountain are at the very forefront of American roots music, having won solid endorsement fromtheir peers and the respect of audiences around the world. It was the album, ‘FIELDS OF FESCUE’ that first won Furnace Mountain a well-deserved share of the media spotlight when it was simultaneously released on both sides of the Atlantic in 2009. It went straight into the Top Ten of the Euro Americana Chart.

After that was followed up in 2012 by the equally well-received CD, THE ROAD TO BERRYVILLE, the band made a huge impact when they toured the UK for the first time. They were such a big hit at Glasgow’s Celtic Connections festival, with 1000 revellers turning out to catch them in action at the city’s Old Fruitmarket, that the BBC included them in the televised highlights from the event. The BBC’s Bob Harris said they were “wonderful” and invited the four-piece to record a studio session for his BBC Radio 2 show.

In 2014 they had a sold-out Irish tour, arranged by Music Network Ireland, and they pulled capacity crowds to every venue they visited in the UK too, all stimulated by hugely complimentary reviews.Now, the band is set to return for a much-overdue visit that will include dates in the UK and Ireland, with a brand new album to promote, called “SHADOW OF PLENTY.”

Clonmel World Music is the only gig in Ireland south of Mayo on this short tour.