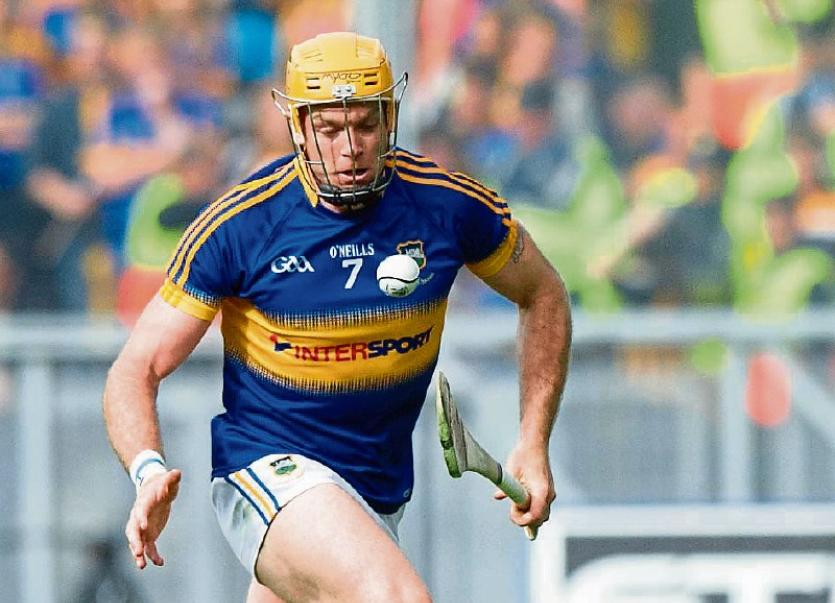 Holders Thurles Sarsfields remain on course for a three-in-a-row of County Senior Hurling Championships after they beat Clonoulty/Rossmore by 10 points in Sunday's semi-final at Semple Stadium.

They'll meet Kiladangan in next Sunday's final at Semple Stadium, after the North team proved too strong for Killenaule in the second semi in Thurles on Sunday, winning by 2-16 to 0-13.

As the 1-22 to 0-15 scoreline suggests, champions Sarsfields won with something to spare.

Clonoulty battled gamely throughout but when Richie Ruth found the net seven minutes into the second half the Thurles team were 9 points clear and well on their way towards a comfortable win.

Clonoulty had a great chance to reduce the deficit five minutes later but Timmy Hammersley, one of their best players, saw his penalty saved by goalie Patrick McCormack.

Captain Padraic Maher (above), Stephen Cahill, Pa Bourke, Michael Cahill, Ronan Maher and Aidan McCormack were all in top form for Sarsfields, who are now fancied to beat Kiladangan in what will be a repeat of the 1938 decider.

That was also Kiladangan's last appearance in the final and two goals from Joe Gallagher helped them to overcome a disappointing Killenaule side.

Killenaule's cause wasn't helped by shooting nine wides in the first half, at the end of which they trailed by 1-9 to 0-8.

They scored just 5 points in the second half and were denied a consolation goal when Bubbles O'Dwyer's free struck a post deep in additional time.

Elsewhere a late Jake Flannery point helped the West combination team, Galtee Rovers-Golden/Kilfeacle cause an upset when they defeated Clonmel Commercials in the County Minor A Football Championship Final at Cahir on Saturday.

The South champions, appearing in a remarkable eighth county final in-a-row, looked in control at half-time when they led by 0-10 to 0-6. However the combo came storming back in the second half and an Edmund O'Dwyer goal shook Commercials before Flannery's point in additional time sealed the deal.

There was double delight for the West in the curtain-raiser, the County Minor B Football Championship Final, when Cashel King Cormacs beat Kilsheelan/Kilcash.

The Saints goals were scored by Jimmy Carr, David Grincell and Russell Quirke, with Jack Doherty, with two goals, replying for Carrick United.

In rugby, champions Clonmel remain unbeaten after three rounds of the Munster Junior League's first division. Their latest victory was a 30-9 away win over Richmond at Richmond Park in Limerick .

Clanwilliam maintained their winning ways by defeating Clonakilty 34-23 in Cork with the help of tries from Graham Roche, Vivian Griseswood and Diarmuid Burke, as well as a penalty try. Niall Leahy converted all four tries and kicked two penalties.