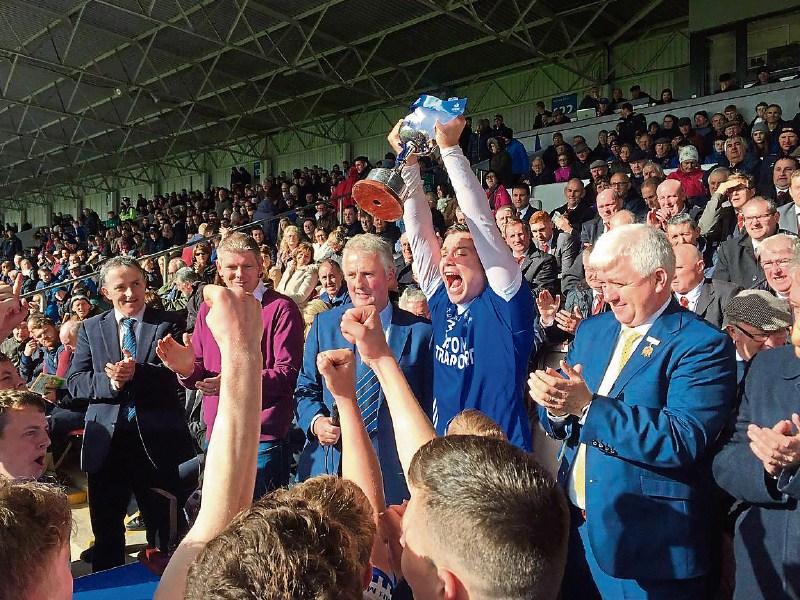 An awesome team performance  drove St Mary's on to secure a phenomenal back to back county minor A hurling titles in a pulsating encounter at Semple Stadium on Sunday.

In a thrilling opening game on the county final double bill at Semple Stadium,  the Clonmel side roared to victory with a powerful second half  performance on a day they showed the greater desire, hunger and determination to pull off an historic victory for the South Tipperary club.

A point adrift at half time, St Marys put in an incredible opening nine minutes of the second half, scoring two goals and two points to just one Lyndon Fairbrother free in reply.

Man of the match Niall Hoctor scored a goal and a point in that period of dominance for St Marys with the other goal coming from Gavin Ryan who guided a Sean Kennedy free over the goal line and Kennedy pointed from a free to put St.Mary's in a strong position.

Brackens responded to  draw level sixteen minutes into the second half when Denis Russell drove home a rebound after Enda Dunphy had saved from Andrew Ormond.

St Mary's moved up another gear to win back control of the game with an immediate response from Gavin Ryan and Niall Hoctor whose points settled the south side.

Fairbrother, who came much moreinto the game in the second half, pointed from play but St Marys scored three without reply from a Sean Kennedy free, a point from Niall  Hoctor and a score from Conor O'Sullivan  to give them a four point lead  with a minute remaining.

Fairbrother gave  Brackens some hope converting a free in additional time but  St Marys held out with Conor O'Sullivan scoring a point from midfield  to send the St Mary's fans  into celebratary mode.

St Marys showed tremendous strength of character throughout, none more so than in the first half when Brackens surged ahead against the run of play  when a Shane Doyle  goal wiped out  St. Marys early lead. Doyle finished to the net after Enda Dunphy in the St. Mary's goal saved an Andrew Ormond effort.

Six minutes later St Mary's squandered the chance to get back in front when Sean Kennedy struck a penalty off the upright but the south side finished the first half the stronger  taking the last three points of the first half  with two Sean Kennedy frees and a score from the outstanding Gavin Ryan.

That three point surge in the closing minutes of the first half was to set the tone for St. Mary's who continued on in that vein at the restart of the second half .

Hoctor scored a goal and  four points in the second half  and Mary's had heroes all over the field.

In defence Kyle Peters and Joe Gunne were excellent in front of goal providing excellent cover to Dunphy in goal. Gavin Ryan had a massive impact on the game  while Jamie Ahearne did an excellent man marking job on Fairbrother  throughout the hour.

Hoctor was the star turn  in attack  and Sean Kennedy's contribution of five scores from frees kept the scoreboard ticking over for St Marys at crucial stages of the game.

It was a momentous day for StMary's, back to back county A minor hurling titles secured  on one of the proudest days in history of the club.