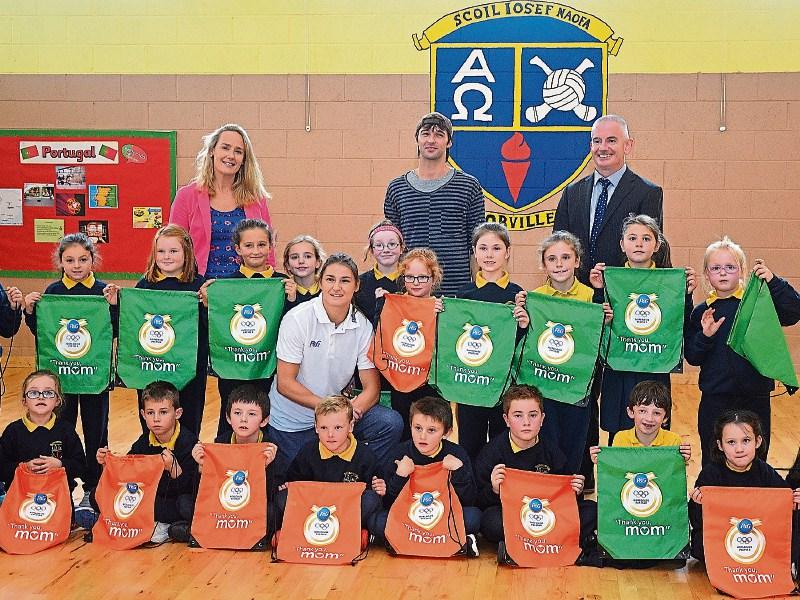 World and Olympic champion Katie Taylor visited Scoil Iosef Naofa, Corville this week to pay tribute to a brave young boy called Jack Ryan. Recently Jack along with his principal John Slattery and Ms. Frawley entered a competition for brave children who have overcome personal difficulties and still manage to compete in sports.

The competition was called ‘Thank you mum’, a campaign to recognise the influence and support Irish mums give to all their children. This competition was sponsored by Proctor and Gamble.

During the visit Katie spoke of Jack’s unbelievable courage and said she was honoured to meet both Jack and his twin sister Amy, both 2nd class pupils in Corville. Katie acknowledged the tremendous work done by Jack’s parents Enda and Linda and also the school community. Katie also remarked on the wonderful sports facilities that Corville has to offer the present and future children of Roscrea. Mr. Slattery thanked Katie for an unforgettable day that will live long in the memories of every child and adult present. “Katie is an inspiration to our community and she is a credit to her own mum”. Katie was very generous with her time and addressed all the pupils at length in the school before leading a 45 minute PE session with Jack’s class. Katie left the school, leaving behind big dreams for the boys and girls to achieve and several sets signed boxing gloves that will be raffled by the school during the year. Mr. Slattery remarked that Katie is one of the most down to earth people he has ever met and that she would be a natural teacher. Katie and her team have promised a return visit to Corville in the future.