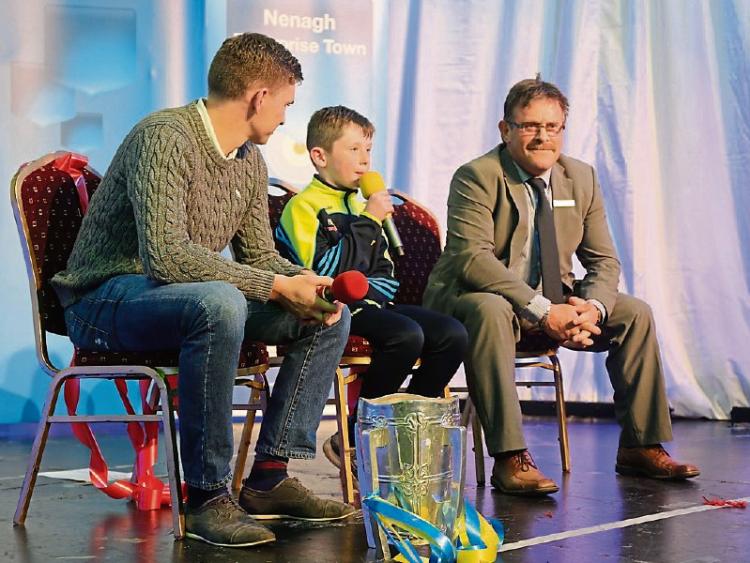 Nenagh's first enterprise town weekend was a massive success over last weekend with thousands of people pouring through the doors to sample what the area has to offer in jobs and community groups.

The Bank of Ireland-sponsored event, which was opened by Junior Minister for Employment and Small Business Pat Breen, had over 100 stalls showcasing what's on offer.

And local Bank of Ireland manager Dympna Harty revealed they had to turn businesses away at the last minute.

“You should be very proud of what you have here,” said Deputy Breen. “This is an important two days in the calendar if we are to create jobs.”

The Clare TD pointed out that the Mid-West had the biggest jobs growth rate outside of Dublin, but that they needed to “drive the recovery into every part of Ireland”.

He said that if rural Ireland was to recover, we must start at the bottom.

“You have to start small and you will grow,” said Deputy Breen, who said that a €4m increase in LEO funding would help that.

Referring to the current pipe laying work that is disrupting Nenagh town centre on a rolling basis, he said: “You have to have a little bit of pain to gain. This is a €17m investment. You are going to have a lovely streetscape.”

Deputy Breen urged more small enterprises to get online, pointing out that €850,000 per month is spent on online shopping.

“At the moment, only 25 per cent are online. We need to increase that,” said Deputy Breen.

Meanwhile, Ms Harty hoped that the weekend event would give local businesses a “lasting uplift”.

She described the reaction by Nenagh businesses to take part in the event as “positive”. Ms Harty thanked her committee and all the volunteers who helped bring the event to fruition.

Among the highlights was a visit from All-Ireland winning captain Brendan Maher, who spoke of how much his family has influenced him and the challenges ahead for Tipp's hurlers. He joined rap sensation Timmy Costello from Milestone,, Thurles, for a rousing rendition of the Tipperary Rap.

The audience was treated to a number of songs from local baritone and Royal Irish Academy student Dylan Rooney, who started set the appropriate Some Enchanting Evening.

Saturday was given over to local community groups and sports clubs, including talks by Tipperary senior footballers George Hannigan and Kevin O'Halloran and international snooker champions Noel and Mark Gleeson.

Throughout the day, the crowd was entertained by members of Nenagh Choral Scoiety, Nenagh Youth Musical Academy and sean nos dancing.