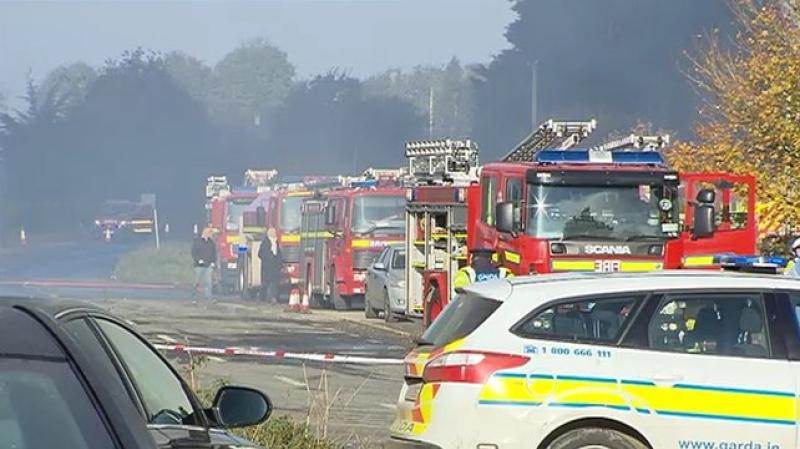 The local community is rallying around the Martin family in Kilkeary this week following a massive blaze that destroyed their factory.

The TIPPO International Ltd plant was burned to the ground in a blaze that broke out shortly before 7pm on Sunday and was still smouldering this Tuesday.

“They are getting a huge amount of support from the local community,” Cllr Hughie McGrath told the Tipperary Star.
He said the fire, which caused millions of euro worth of damage, was devastating for the Martin family as well as the communities in Nenagh, Templederry and Toomevara, where many of the 69 members of the workforce come from.

“They are good employers. The Martins spent 20 years building up the business and are good for the local economy. For them to come through the recession and find a new customer base and this to happen is terrible. TIPPO is the type of flagship business you need in rural Ireland,” said Cllr McGrath.

Following the blaze, Paddy Martin, managing director, issued a statement saying they hoped to be back in limited production by next week, and Cllr McGrath said that this typified the character and spirit of the family.

“They started with nothing and built up that business,” he said.

Local businessman Bernard O'Neill of Light Hardware Supplies Ltd, which operates across the road from TIPPO, described the tragedy as an “awful shock”, saying so many people were affected by it from the Martin family to the workers and suppliers.
He described the fire an a “frightening experience”, saying it was unbelievable the speed with which the building caught fire as it was being fanned by a strong breeze.

“The Martins are local people from Toomevara and the locals do appreciate the work they do. Numerous people have come forward to support them. People were bringing food and even at Mass this Tuesday morning people were coming up to them,” he said. Mr O'Neill said it was typical of the Martins that they were actually saying sorry to the locals for what had happened.

Nenagh Chamber of Commerce president Denis Finnerty told the Tipperary Star: "We hope they will be back. In the face of such destruction, to find the strength to carry on can't be easy."

He hoped Tipperary County Council would now "do their best" to remove any roadblock that might prevent them from starting up again. He also pledged that Nenagh Chamber would do anything it can to help.

"TIPPO are a very imprtoant piece of infrastructure in the working community in Nenagh and surrounding area," said Mr Finnerty. "We depend so much on each other. TIPPO are hugely important to the local economy with the amount of people they employ. It is only when something like this happens that we really see that."

Meanwhile, Tipperary Fire Services have left the scene this Wednesday after spending more than 40 hours on site since the blaze broke out on Sunday at around 6.50pm. However, smoke was still rising from the burnt-out premises.

The charred plant was sealed off ahead of a Garda investigation into the cause of the fire. However, finding the cause may prove difficult because of the extent of the damage. The Gardai said in a statement to the Tipperary Star that the scene was preserved and will be technically examined “when deemed safe to do so”.

Earlier this week, Mr Martin said in a statement that they had already identified alternative premises for production and were implementing an action plan to recommence limited production within the next week.