Thurles, Roscrea and Nenagh in spotlight over raw sewage 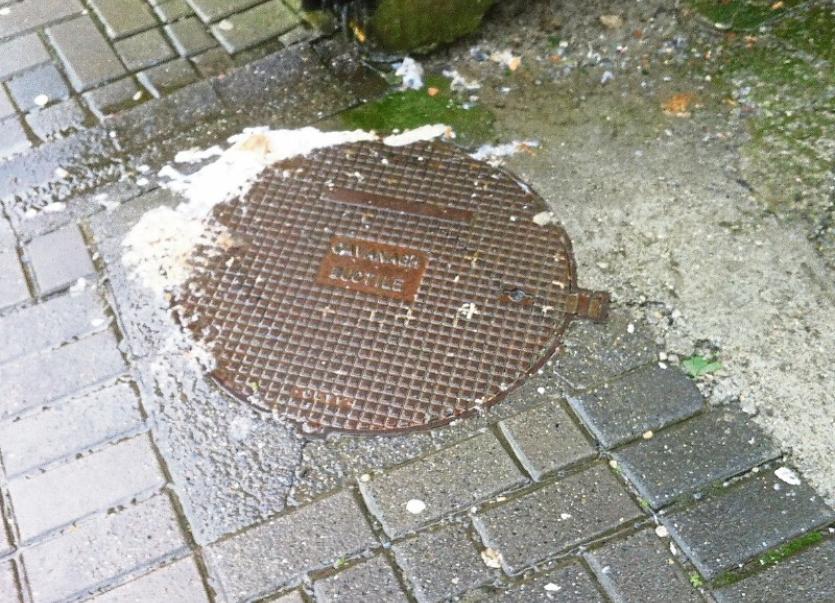 An overflowing sewer in Thurles. This can happen after heavy rain as storm water and waste water back-up in the system

Thurles, Roscrea and Nenagh have all been named by the EU as towns whose waste water systems pose health risks because raw sewage is being pumped into watercourses.

And it could be 2020 before any remedial work or investment is carried out in some cases.

The problems arise where there is no differentiation between eliminating waste water and storm or foul water, with both going through the same pipes. When the areas affected are hit by heavy rain, such as we have experienced over the past number of days, drains can back up and sewage and storm water mix.

The news comes after the Government was warned by Brussels that it faces daily fines for failing to carry out work to provide waste water treatment facilities in 38 areas across the State. The threat could cost the State pay anything up to €10m in a one-off fine and €20,000 per day after that if Brussels imposes the same level of penalty it imposed on Greece last year.

The Irish Government was warned by the EU in 2005 to stop the practice of allowing waste water to be discharged into rivers and other watercourses.

Waste water and other water infrastructure is no longer the remit of the local authority as it falls under Irish Water.

An Irish Water spokesperson told the Tipperary Star in a statement: “Work is planned or underway in Thurles, Nenagh and Roscrea as part of our ongoing investment in waste water infrastructure across the country. Irish Water's investment in waste water is designed to cater for future growth and development as well as support continued compliance and address areas where compliance is an issue.”

However, the time frame for the work stretches out to 2020 in some cases.

The statement says that investment programmes which support future development, and also continued or future compliance, include a project at design stage to increase the capacity of the Nenagh waste water treatment plant scheduled for completion in 2019; operational improvements at Roscrea waste water treatment plant, which are underway since 2014, with further improvements to the waste water network set to commence in 2020, and planned work to the waste water network in Thurles, which is scheduled to begin in 2020.

“Delivering this investment will address agglomerations not meeting EU requirements on waste water treatment and capacity and ensure continued compliance across the country,” they said.

Thurles councillor Jim Ryan described the situation as an “absolute disgrace” and an “embarrassment”.

“I have been raising this for years. It is the top of my priorities. It is a scandal. I am again calling on Tipperary County Council and Irish Water to speed up the work,” said the Independent councillor.

“I am very disappointed that it could be 2020 before it might be resolved,” he said.

Cllr Seamus Hanafin also described the situation as “disappointing, given the amount it cost to set up Irish Water and the huge amount of money that has gone into Irish Water”.

“These are urgent problems that are not being dealt with urgently,” said the Fianna Fail councillor.

He said that the 2020 date looked like any solution was being “pushed down the road and this is not acceptable”.

Cllr Hanafin further pointed out that flooding in Friar Street and Stradavoher was caused by this “inadequacy” in the piping system.

He further cited the absence of trying to deal with Thurles's hard water problem, saying that despite the new system from Rathcannon helping to reduce the lime content of the water, it had taken a long time to finish and it would only reduce lime but not lead to soft water.

In Nenagh, Cllr Seamus Morris said the lack of investment was “all down to decision making and the disaster that is Irish Water”.

The Sinn Fein councillor said that when Irish Water was set up, the Government took away council funding and spent it on metres that would never be used.

Cllr Morris also questioned the €500m planned investment in taking water from Lough Derg to pump it to Dublin, where, he said, 40 per cent of it will leak into the ground.

“That money could have been used for facilities in Nenagh, Roscrea and Thurles,” he said.

Cllr Morris pointed out that he had looked for a service level agreement between Irish Water and Tipperary County Council when it was established.

“Five councillors walked out of that meeting. The councillors who stayed behind will now be the ones complaining. The chickens are coming home to roost,” he said.

Roscrea's Cllr Michael Smith said that everyone knew the plant in Roscrea was “not up to standard”.

However, he said that driving the project on was not down to any fault of the local authority's engineering staff. The local engineers had been “firefighting” with these problems.

“I would have brought this up over the years. We would have had reports from the council dealing with water, but we have never seen any movement on them. They never moved on to the next stage. There has been no movement on the Roscrea plant for 10 years. It needs to get the nod and it has never got the nod,” he said.

The Fianna Fail councillor said that from the public's point of the view, that was “not good enough”.

With regard to the health risks, he said that when it came to health and safety, Irish Water should be looking at these projects and need to be putting them at the top of the list.