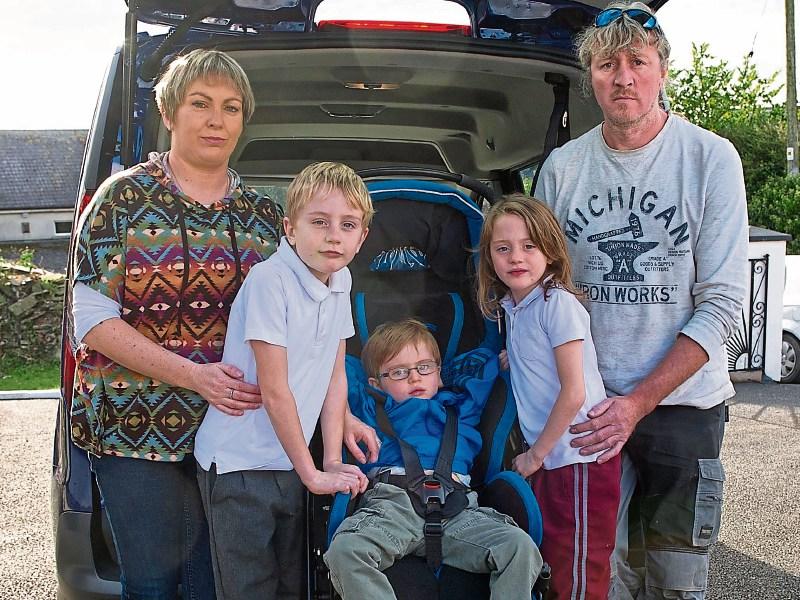 Evan Hearne with his family.

Arch rival hurling parishes Ballingarry and Killenaule, captained by two of Tipperary's All-Ireland heroes, will play each other on Sunday to raise funds to purchase a wheelchair accessible car for a little boy suffering from a rare neurological condition.

The "Rumble in The Village" over 40s hurling challenge match, featuring John 'Bubbles' Dwyer and James Barry as opposing captains, is one of a series of fundraising events taking place this Bank Holiday Weekend for three and a half years-old Evan Hearne from Church Lane, Ballingarry.

Evan, who is son of Joanne Fitzgerald and Eddie Hearne, has Leigh syndrome, a very rare and severe mitochondrial disorder, which causes a progressive loss of one's mental and physical abilities. Children diagnosed with the syndrome are lucky to reach their teens. Evan can't talk or feed himself and can't walk.

The "Get Me Motoring" campaign has been set up in Ballingarry in the past two weeks with the goal of raising €25,000 to purchase Evan a specially adapted wheelchair accessible car.

Evan's mother Joanne is overwhelmed by the public support they have received.

"I can't believe the support we are getting and the way everyone has come together and offered their help. This car will make a huge difference to Evan.”

She said the people carrier car they currently own is not suitable for his needs. When Evan needs to travel to catch the bus to Lus na Greine pre-school in Clonmel or to attend hospital appointments in Dublin, she spends a lot of time dismantling his special buggy to get it to fit in the car. Evan has to be placed in a child's car seat, which isn't comfortable for him, especially when he has to travel to and from Dublin for hospital appointments.

Cllr Imelda Goldsboro (FF), chairperson of the Get Me Motoring Campaign Committee, said their fundraising effort aims to raise the €25,000 needed for the wheelchair accessible car by next week.

The "Rumble in The Village" match at Ballingarry GAA Field at 3.30pm on Sunday and are praying for good weather on the day.

The weekend of fundraising in Ballingarry will kick off with a children's Halloween disco in Ballingarry Community Centre from 5pm to 7pm this Friday, October 28. A fundraising social night will take place in Amby's Bar in the village on Saturday featuring dancing and music by DJ Maher from 10pm onwards.

Cllr Goldsboro said the children of Ballingarry, The Commons and Lisnamrock National Schools are also running Halloween fancy dress days on Friday to raise money for the cause

If more than €25,000 is raised, the extra money will be used to assist Evan's family to purchase a PPod seat for him. This bean bag style seat will provide extra support and comfort for him when he is sitting. Evan is developing curvature of his spin due to his condition and this extra seating support is vital for him.

More information on the campaign's fundraisers can be obtained from the "Get Me Motoring" Facebook page.