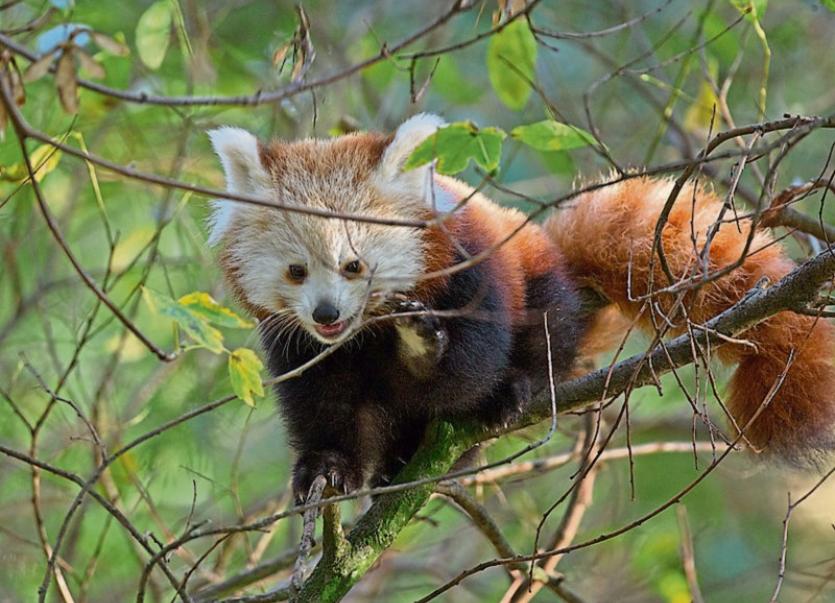 A new red panda baby born at Fota Wildlife Park, Co. Cork has finally emerged from its nesting box, and the Park are calling on members of the public to name the cub. The baby, who is male, was born in late June after a gestation period of about 19 weeks (135 days) to mom Bonnie, aged five, and dad Pete, aged seven. This is Bonnie’s fifth cub and they are both doing well.

Speaking about the cub’s arrival at the park Lead Warden Kelly Lambe said “The birth of the Red Panda cub is important in terms of conservation, as this species is officially classified by the International Union for Conservation of Nature as endangered. The park actively contributes to the care and breeding of many endangered species such as the Sumatran Tiger and the Asiatic Lion.” She continued “We are delighted to see this cub emerging from the nesting box, where he has been successfully cared for by his mom Bonnie over the past four months. The mother will typically continue to look after her cub for up to a year.”

It is estimated that fewer than 2,500 mature Red Panda individuals remain in the wild. Habitat fragmentation and destruction of bamboo forests is the biggest threat to their survival followed by hunting and competition from domestic livestock. Fota Wildlife Park contributes to the European Endangered Species Programme (EEP) Forest Guardian Project which employs forest guardians to protect Red Pandas in Chintapu Community Forest at Maimajhuwa VDC in Nepal.

A unique species, the Red Panda is related to the Racoon, while the Giant Panda is related to Bears. The Red Panda is often referred to as the Firefox or Lesser Panda and is up to 120cm in length, including an impressive tail of up to 60cm long. It has long, soft reddish-brown fur with black and white markings as well as piercing black eyes, and the female is slightly smaller than the male. An arboreal species, it forages amongst branches of trees but also eats fruit, insects and small animals. Its diet is mostly made up of bamboo and the Park has always fed its Red Pandas with locally-grown bamboo that is plucked fresh on Fota Island.

Members of the public who wish to suggest a name for the new cub can find full details on how to enter on the wildlife park’s website, www.fotawildlife.ie. The winner of the best name will win a Park Membership to Fota Wildlife Park, the closing date is Fri 11th November.