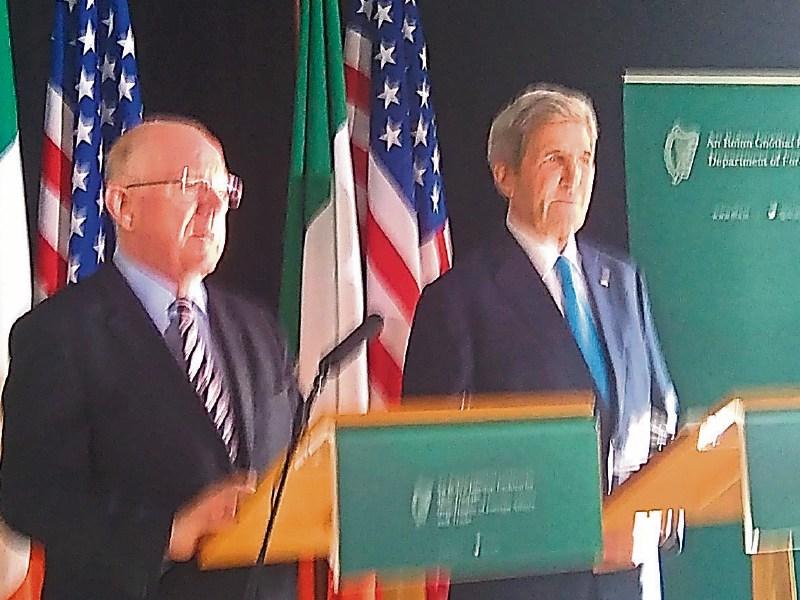 It was a long way to Tipperary for United States Secretary of State John Kerry but one he said he was privileged and honoured to make.

Secretary Kerry was in Tipperary on Sunday morning to accept the Tipperary International Peace Award for his efforts towards resolving conflict throughout the world.

He said it was a special day for him to be joining a roll of honour of previous recipients that included Nelson Mandela, Bill Clinton and George Mitchell.

"It is a long way to Tipperary for me", he said, quoting the famous World War One song, "but one I was so happy to make".

"And if I get hungry I can have a meal in the Barack Obama Plaza and a drink in the Ronald Reagan pub", he joked.

Secretary Kerry interrupted his hectic schedule of international diplomacy to travel to the scenic Glen of Aherlow to accept his award.

He flew into Shannon Airport on Sunday morning and arrived in Aherlow amid tight security. He was accompanied by his special envoy to Northern Ireland and longtime friend, Senator Gary Hart.

He was greeted at Aherlow by Minister for Foreign Affairs and Trade, Charlie Flanagan, and the two men held talks for thirty minutes before addressing a joint press conference (pictured above).

Secretary Kerry then made his way to the hotel function room to receive his award.

From Tipperary he was travelling on to London to hold talks on the ongoing conflict in Libya.

Glowing tributes were paid to Secretary Kerry on his diplomacy across the world, in countries such as Iran, Afghanistan and Syria, by Peace Convention secretary Martin Quinn.

Mr Quinn said Secretary Kerry was helping to bring peace to many war-ravaged countries across the globe.

Secretary Kerry said he was honoured to accept the award on behalf of everone in the State Department and those who worked with him in resolving conflict.

After listening to the song "It's a Long Way to Tipperary", it reminded him of those who perished in the Great War and so many more who had died since.

But he was confident that it was talking and diplomacy that would lead to conflict  resolution and he committed himself to continuing that process.

Earlier at the press conference, he spoke about Brexit and hoped that it wouldn't damge the peace process in Northern Ireland.

However, when asked a question about the controversy in the US presidential race about Democract Party candidate Hillary Clinton's emails, he said he wouldn't comment as it was a matter for the FBI and the Justice Department.

"There are things I would like to say as a former party nominee but I cannot", he told journalists.