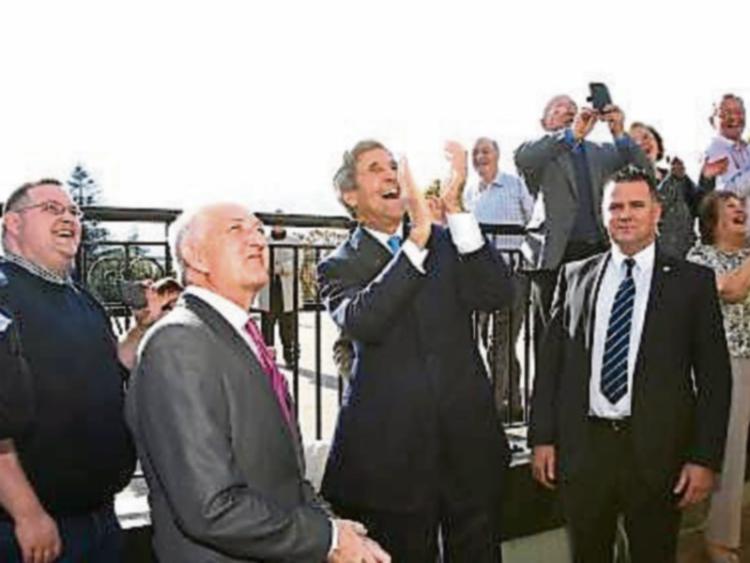 It was mainly business when United States Secretary of State John Kerry visited Tipperary on Sunday to accept the Tipperary Peace Award.

As well as accepting the award for his contribution to peace in so many countries worldwide, he held talks with Foreigh Minister Charlie Flanagan when the topics included Brexit and the Northen Ireland peace process.

But there was one moment away from the international diplomacy that surprised a newly married Tipperary couple.

Cahir-based garda Paul Shanahan and his bride Maria O'Leary were married a day earlier when all the congratulations came from family and friends at their wedding.

Little did they expect a day later that one of the most powerful men in the world would be joining in the congratulations.

Secretary Kerry was  being shown around the Aherlow House Hotel when he spotted the happy couple on their balcony, with Maria in her wedding gown.

He stopped immediately to applaud Paul and Maria and give them a huge smile.

Later, when addressing those gathered to see him accept the Peace Award, Secretary Kerry sent his 'profound apologies' to the couple for the interruption.

However Paul and Maria were delighted to be greeted by the distinguished visitor.

Many of Paul's garda colleagues were on duty for the day as part of a huge security operation centred around Secretary Kerry's visit.

Secretary Kerry is pictured applauding the couple as he was being shown around the hotel.