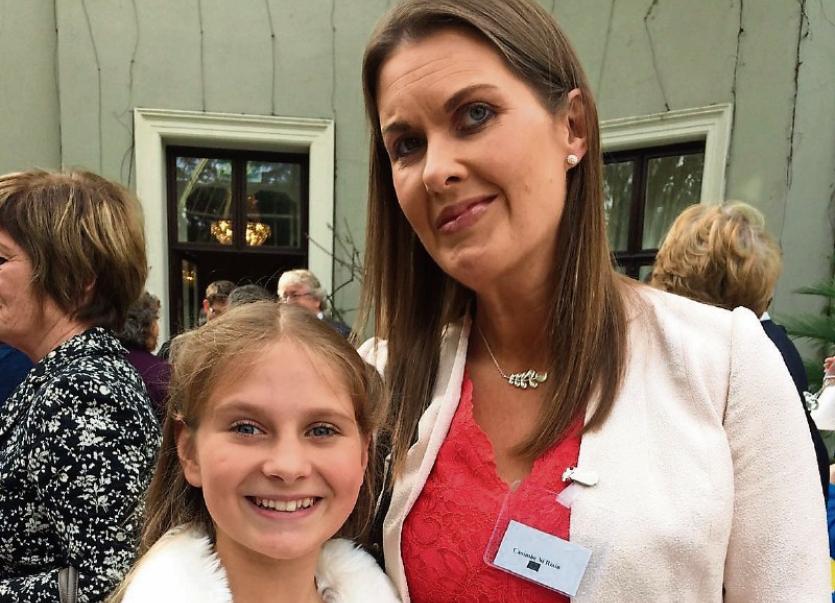 Giulia Naddeo has won a Léargas Language Learner of the Year award.

Teacher Caoimhe Ní Riain, who runs the Blue Star programme in Gaelscoil Chluain Meala, where Giulia is a pupil, nominated her for the award, which was presented at a ceremony in Farmleigh House in Dublin.

Giulia and Caoimhe are pictured above at the presentation ceremony.

Despite being only ten years old she speaks English, Irish, German and Italian. She started in Junior Infants at Gaelscoil Chluain Meala with no knowledge of Irish, but it soon became clear she had a talent for languages and was soon speaking confidently to her teachers and other pupils.

Her teacher then found out that she speaks German at home. Giulia even helps with vocabulary and corrects any mistakes!

She was brought up by her German-Irish mother and Italian father and was raised in a multilingual environment, speaking German, English and Italian prior to starting Irish in school. She had German and Italian from birth and English was then introduced.

She attended an English pre-school and began to learn Irish in Junior Infants. She frequently travels to Germany and Italy to see family and friends, and speaks to her grandparents in German. She also watches DVDs, listens to CDs and reads in German and Italian.

Giulia has a wide understanding of different cultures and the traditions of countries outside Ireland as a result of her ability in languages. She often reads about Germany and Italy and when she visits her family in these countries she sees the way they celebrate special occasions, and the ways they differ from Ireland.

Giulia wants to travel the world when she is older and knows that speaking four languages will be very useful. However, for Giulia it's not just about knowing the languages; it's about learning about different cultures and she knows she is really lucky to experience so many different traditions.

She is very proud of her languages, as are her family – particularly her grandmother who lived in Cork and spoke Irish, just like Giulia, before moving to Germany. She is looking forward to all her future language-learning adventures.

The European Language Label awards is an annual event co-ordinated by the European Commission and managed in Ireland by Léargas.