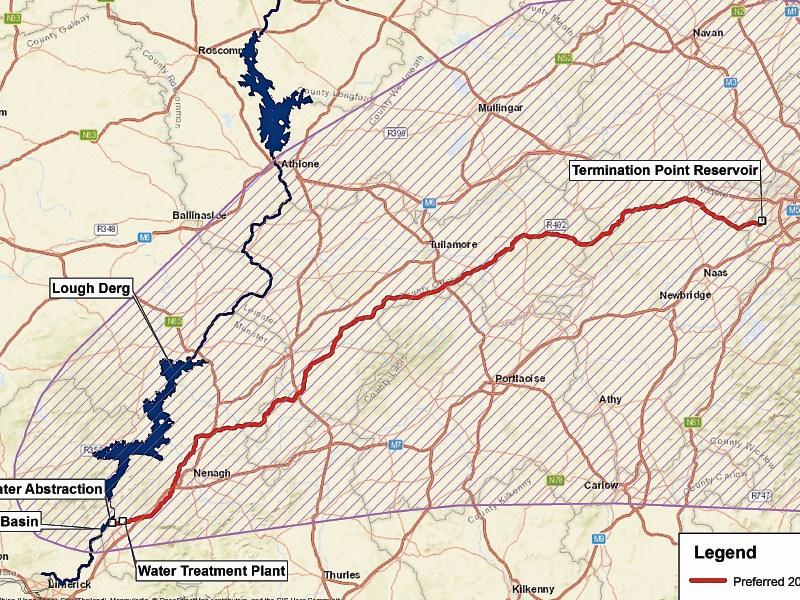 Opposition has already started to grow following Irish Water's release this Tuesday of its preferred route for a 200km long pipe to bring water from below Lough Derg to Dublin and beyond.

The State agency launched its decision to plough ahead with the €1.2bn project, which will see farmland dug up from Parteen Basin through Tipperary and Offaly and on to Peamount outside Dublin. Irish Water has narrowed an initial 2km-wide corridor down to a 50m corridor for works and a 20m corridor under which the pipe will lie.

Irish Water has put the time scale for its construction as starting in 2017 with planning permission being sought and actual construction being carried out between 2021 and 2024. The plan will involve building a pumping station at Birdhill which will send the water to outside Cloughjordan from where it will go to Dublin.

The announcement was made ahead of a planned meeting between Irish Water and Tipperary county councillors scheduled for Nenagh this Thursday, November 10. It is understood that the meeting, which will take the form of a workshop, will see councillors quiz Irish Water on its projects and plans for Tipperary, including plants in towns and villages such as Cloughjordan and Ballycommon.

However, it it now likely that the meeting will be dominated by questions surrounding the release of the State agency's preferred route for its pipeline to take water from Parteen. The Shannon Protection Alliance, which is committed to defeating the plan, is believed to have met North Tipperary-based councillors this week to go through questions they would like to see put to Irish Water on the plan.

Meanwhile, many local and national groups have already come out against the plan which would see 2 per cent of the River Shannon's water being abstracted daily, or a total of 330 million litres of water.

The initial plan was to bring water from Lough Derg to Dublin via a new reservoir at Garrynahinch, County Laois, that would have served as a lakeside amenity. The scale of the project then mushroomed to include Kildare, Wicklow, Westmeath and Meath. The service area now includes Longford, Kilkenny and Carlow.

“We are against it on three counts,” Donal Whelan of the River Shannon Protection Alliance told the Tipperary Star. “We don't know what the long-term effects of taking water will do to the environment. They are talking about 0.2 per cent or 330 million litres per day. But that is not accurate as that could rise to 26 per cent when the water levels are low. The Shannon doesn't always flow at the same rate,” he said.

The group also has economic reservations, saying many State projects go over budget, and “there will not be a drop of water reaching Dublin for eight to 10 years”.

IFA North Tipperary chair Tim Cullinan told the Tipperary Star they were “absolutely” against the pipe and claimed it was being “foisted” on them.

For more on this story see this week's Tipperary Star