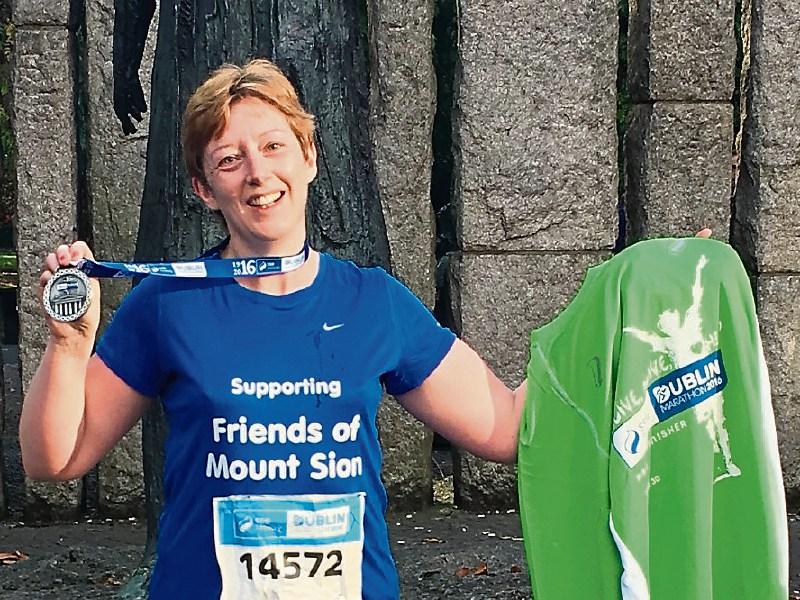 An inspirational lady Nicola Ryan from Annacarty  completed the Dublin City Marathon  to raise funds for the Friends of Mount Sion. town.

Looking forward to her upcoming 42nd birthday, Nicola is no stranger to taking risks and pushing herself to the limit when it comes to raising money for charities dear to her heart.

In 2012 Nicola ran a mini-marathon to raise money for the Irish Sudden Infant Death charity in memory of her brother who died 30 years ago and in 2014 she did a parachute jump in aid of Diabetes Ireland for her sister who passed away in 2006 from the disease.

“When I told my two sons Declan (19yrs) and Gerard (21 yrs) that I was running the Dublin City Marathon they thought I’d completely lost the plot,” laughed Nicola. “My husband Martin has been very supportive collecting sponsorship money before the marathon.”

Nicola decided to raise funds for the Friends of Mount Sion as her mother Nuala Fahy, uses the respite centre at Mount Sion. “There was a lot of training for this and although I found it time consuming it has been  fun,” said Nicola.

Nicola trained for the marathon on her own and completed the 26.2 miles Dublin City Marathon in 5 hours.

Without a doubt Nicola is one inspirational lady.  Donations are still being collected for Nicola’s fundraising efforts for the Friends of Mount Sion. If you wish to donate please contact Nicola on 087 992 5254.The Mount Sion residential facility in Tipperary Town was established in 1997, providing medium to long term accommodation and 24-hour nursing support its health service users.

Mount Sion has come under threat of closure in the past few years and again in April 2016 when the Health Service Executive raised concerns about fire safety issues at the former Christian Brothers school.

There are now eight long term residents at Mount Sion some of whom have been living there for 15 years.