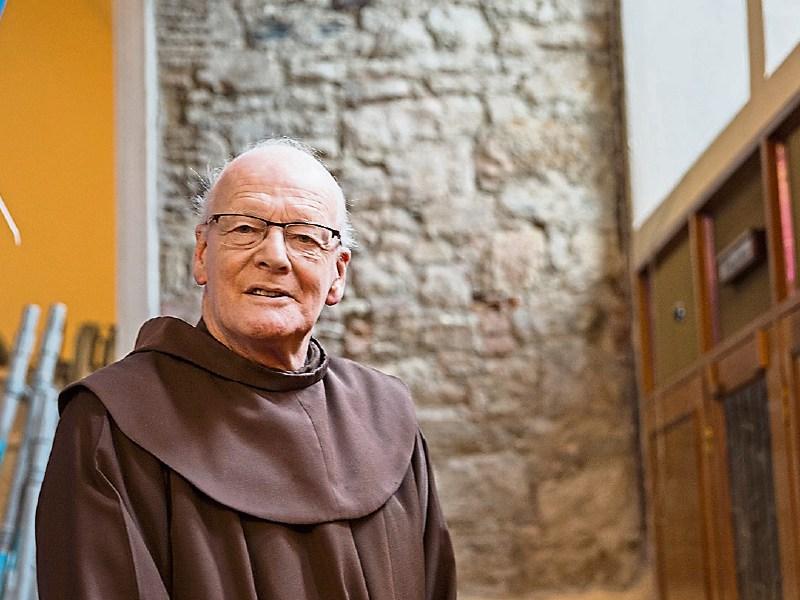 An intriguing glimpse at a structure built in Clonmel more than 600 years ago is now on display at The Friary church in Clonmel.

When the plaster on the inside east face of the church in Abbey Street fell away from the wall last June, subsequent tests revealed that the structure underneath was the original wall of the tower, which was constructed between 1350 and 1400.

It has since been decided, with the help of professional advice, that this section won't be re-plastered and the original wall will be left visible in The Friary, which is believed to be one of, if not the oldest building still in use in the town.

"We were fortunate that nobody was near that area in the church when the plaster fell", says Fr. Larry Mulligan, Guardian of The Friary, who is pictured in front of the wall.

The area near the Butler tomb was immediately screened off by a local builder.

Dublin-based consultant architect Margaret Quinlan, who's originally from St. Patrick's Terrace in Clonmel and is well-known for her work on the restoration of the Main Guard and the town walls, was recruited to examine the area.

"Residual moisture in the brickwork loosened the bonding between the brick and the plaster", says Fr. Mulligan.

Following tests it was decided that all of the plaster would have to be removed. Some pointing of the wall may need to be carried out, although this won't interfere with the structure, which will be left in its original form.

The wall is now visible through a mesh curtain, which it's hoped will be removed by next Easter (Easter Sunday is April 16th) once the work is completed.

A fundraising drive has now been launched to raise €15,000. Donation envelopes are available at the rear of the church.

"This once-off fundraising drive will cover all the costs including the identification of the problem, consultancy fees and the preservation works necessary to maintain the tower in its original form", says Fr. Mulligan.

"The Franciscans have had a presence in Clonmel for the last eight centuries and this unique feature of the town's history will be preserved for the benefit of present and future generations of Clonmelians.

It will be an addition to the architectural heritage of the town".

The original Friary church in Abbey Street was built in 1269.

This building had a turbulent history. The Franciscan community was dispersed, moving to other locations in the town after the monastery was seized during the Suppression on March 8 1540.

This followed King Henry VIII's plan, announced in 1536, for the dissolution of the Irish monasteries to raise money for the state.

The Franciscans returned to Abbey Street in the 1800s.