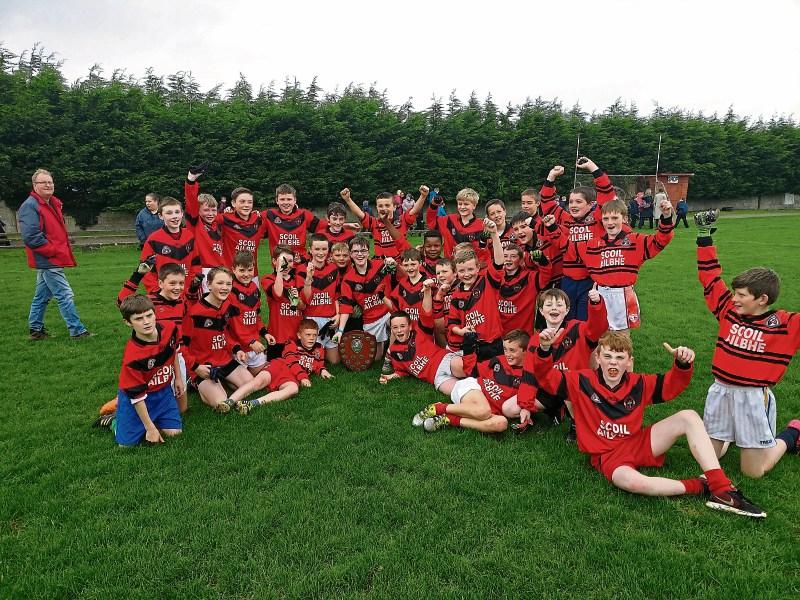 Wednesday the 26th of October saw the completion of the under 13 A Football championship for 2016.

Neighbours St Colmcilles of Templemore and Scoil Ailbhe of Thurles went head to head in The Ragg in the all Mid-Tipperary county final.

After conceding the first score Scoil Ailbhe settled quickly with Aidan Butler and Robbie Stapleton dictating the tempo up front - the latter stroking over a brace of points while the former teeing up a goal each for his colleagues in the full forward line, Michael-Anthony McCarthy and Sean Gleeson.

McCarthy quickly added a third goal to the Scoil Ailbhe tally as their midfield of Corey Moore and Darragh Minogue continued their dominance in the crucial middle third.

The Templemore boys showed their resolve, scoring a goal and a point to drag themselves back into the contest as the half drew to a close. Defenders Sean Leahy, James Mockler and Josh Connolly using all their determination and skills to limit the losses at this stage. Half time score 3-3 to 1-2.

A good start to the second half was vital for both sides in what was proving to be a fantastic contest. When it was most needed Scoil Ailbhe's powerful wingbacks, Jekabs Rusins and Siya Ndizingani provided the leadership to cut out the Templemore attacks and keep the supply of ball flowing to their dangerous forwards. Scott Brennan, a constant link between defence and attack flicked on to the flying Gleeson who carried the ball astutely from flank to centre before finishing a great goal. Rory Fleming was next to turn provider, using his vision to tee up the excellent Aidan Butler for a much deserved goal.

The half, following the pattern of the first, saw Templemore come back into the contest. A much needed goal was followed by a chance to narrow the gap further from the penalty stop. However a fantastic save from the Thurles keeper David Purcell kept the opposition at arm's length.

Templemore kept going and followed up with 1-2 in the closing exchanges. Scoil Ailbhe brought on Sean Costello and Kieran Purcell to add fresh impetus to the forward line while Andrew Keegan Cian Forrestal and Conor Gleeson helped steady the ship in midfield.

Roared on by the inpirational support of the school from the packed stand, rock solid centre back Niall Dunne carried the ball out of defence for the last time before a superb Darragh Minogue goal sealed the victory. Referee Johnny Butler signalled the end of a tremendous final. The Scoil Ailbhe boys, mentors, staff and families celebrated the historic win. Huge credit to coaches Barbara Ryan and Michael Russell together with the support of Denis McCullagh, Claire Grogan, Peter Donnelly , Ger Fogarty and Principal Brid Ryan for getting the panel to this stage.

Naomh Colmcille's principal Kieran Healy presented the winning captain, Corey Moore with the county shield. Kieran paid tribute to both sides on the quality of football on show and to Willie Clohessy for providing the venue for the final. Finally credit to referee Johnny Butler for facilitating a very entertaining and free flowing county final.