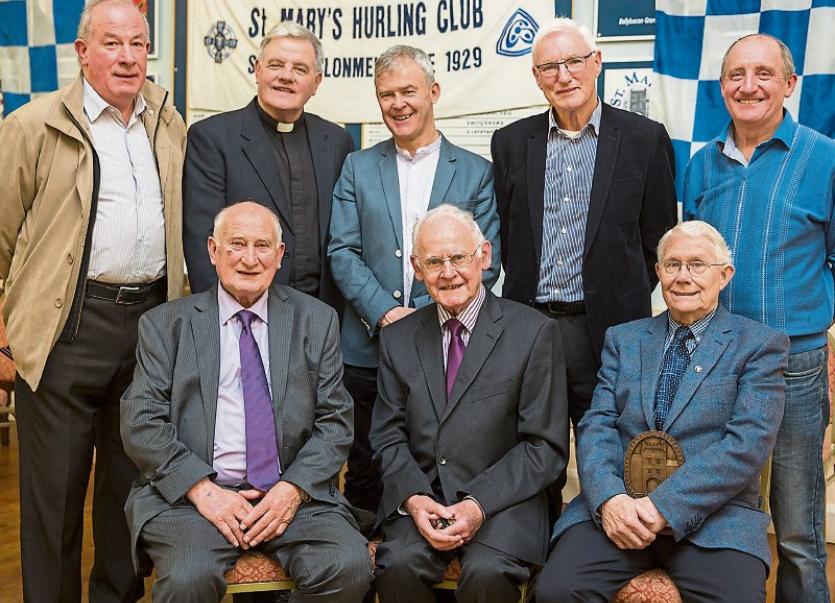 A well-attended GAA Centre in Clonmel was the setting on Saturday night last for the launch by Tipperary County Senior Hurling Manager Michael Ryan of the updated “St Mary’s Hurling & Camogie Club” written by Seán O’Donnell.

Past, present and future hurlers were in attendance, many having travelled long distances, to share in the re-launch of the book.

Club chairman Kevin Leahy glowingly praised the “fantastic book and the magnificent effort put into it by Sean O’Donnell.”

The chairman stated that “in St. Mary’s Hurling Club we pride ourselves in looking forward, but tonight is a night mostly about looking back,” before going on to mention many who had contributed so much to the club (and some continue to), the likes of Mick Forde, Bill Peters, Jimmy Doyle, Billy Carroll, Paddy Mullins, Tom Hill, Martin Deeley, Dan Kavanagh, Mick Ryan, Jimmy Quinn, Frank Maher, Noel Buckley and John Carew.

The book’s writer Dr Sean O’Donnell in the briefest of words, described how back in the 1980s he was “talked in to writing the club’s history and I couldn't refuse” by Fr. Michael Kennedy,  the then club chairman at St. Mary’s. Modestly the author shyed away from saying anything about his book. But of course, this wonderful book, in itself, will forever say it all for him.

Tipperary County GAA Board chairman Michael Burke was lavish in his praise of both the book and the progress of the club.

“This has been a truly fantastic year for St. Mary’s,” he said, before adding “not often are two minor  ‘A’ titles put together in Tipp, that is something to be cherished.... and it augurs very well for the future of this club.”

“I want to compliment the people of St. Mary’s for the magnificent work they have done. It is a privilege to have any success with your club and when your are successful we should cherish that,” added the county chairman.

With words of encouragement he said “build on the successes you have had and you can become a magnificent club again and be a senior club again.”

He also thanked club chairman Kevin Leahy who has been a great friend to the Tipperary County Board through his fundraising support in London for Tipperary and Tipperary teams over many years.

“Upwards and onwards, build on your successes, and enjoy reading your history,” concluded the County Board chairman.

His fellow Upperchurch clubman Tipperary manager Michael Ryan, the man who guided the Liam McCarthy Cup  home to ‘The Premier County’ in September, was next to the microphone.

He started by saying it was a “pleasure to be here to launch the history of the club and to acknowledge the  super work by so many but in particular by Dr. Sean O’Donnell. It is a great record of the club and it is and will be a great thing for the club to have into the future.”

Michael Ryan also praised the “quality of coaching in St. Mary’s and stated that it is definitely no accident that success is now being achieved by the club through coaching and hard work. To win is not  an accident, it is born out of a lot of hard work done by a lot of people” he said.

The final speaker of the night was former club great Mossie Carroll of Tipperary and Limerick inter-county fame who captained St. Mary’s to their one and only South Senior success in 1981. Together with club president, Jimmy Collins, they made a special presentation to those present of that winning team of 35 years ago.

On what was a great night overall,  the gathering included former club player and one-time Christian Brother in St. Mary's CBS, Matt Ruth. After leaving Clonmel, Matt went on to be involved in no less than five All-Ireland hurling finals with Limerick (1974) and then his native Kilkenny, picking up two winners medals.

Fr Michael Kennedy, a former clubman and one time curate in Ss. Peter & Paul’s, of course, had won an All-Ireland with Offaly before coming to Clonmel.

Donnacha Fahey too was present, the first St. Mary's man to win an All-Ireland senior medal in 2001.

In attendance also was  Michael Kennedy, a St. Mary’s player in the 1950s, who later hurled with Dublin and had the distinction of getting the first-ever score in a hurling game on live TV (1962 Railway Cup Leinster v Munster, while playing for Leinster).