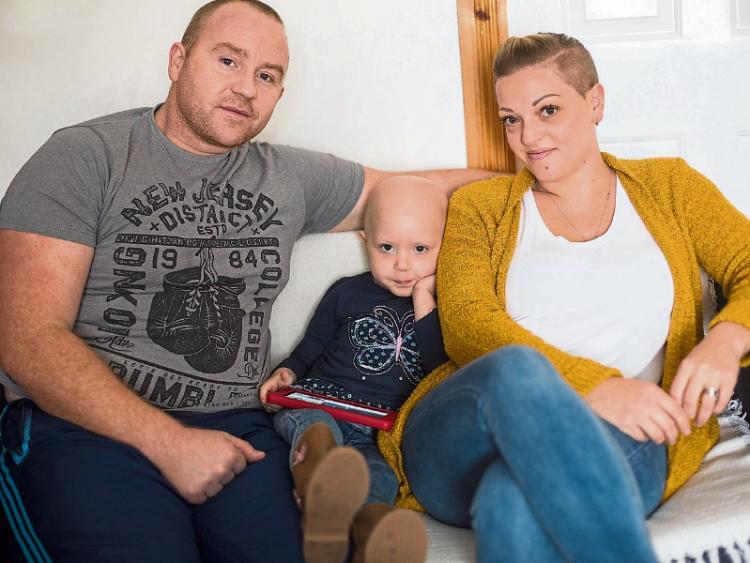 Parents Paddy and Richella Lawlor with Ava in the family home.

The local community is rallying to support the family of a beautiful three year old Clonmel girl who was diagnosed with cancer in May.

The normal, hectic family life of Paddy and Richella Lawlor and their five children was thrown into chaos in May when their daughter Ava was diagnosed with ALL (Acute Lymphoblastic Leukemia).

Both parents  had to take a leave of absence from their  jobs to care for Ava who has to travel to Crumlin Children's Hospital in Dublin on a regular basis and also attend South Tipperary General  Hospital.

Their friends, neighbours and family have been very supportive and are coming together  to hold a fundraiser on November 26th when a Little Mix tribute band will play two gigs in Clonmel .

Ava had been complaining of a pain in her stomach and was getting high temperatures for a few weeks but Paddy and Richella were told that she had a viral infection and they were not alarmed.

“Then one day we brought Ava to South Tipperay General Hospital and tests were done.  We were sent to Crumlin immediately and it was just a total shock to the system", says Richella.

"You see things like this on the television and you think it's not real but it is. I find progammes about hospitals and sick children very hard to watch but I looked around Crumlin that day when we brought in Ava and to see so many ill children walking about and in beds was  like walking onto the set of a TV show".

Since then Paddy, a bricklayer with Clancy Construction, and Richella, who worked in Tesco in Clonmel, have had  an exhausting and traumatic few months, caring for Ava at home, and ensuring she keeps all hospital appointments in Dublin and Clonmel.

Richella describes her daughter as “a tough little woman”.

Says mum Richella - “Everybody loves Ava with her big eyes and a great smile. She loves music  and My Little Pony. All of the consultants and people in the hospitals have told us  to ensure  that Ava carries on as normal as possible and that is what we are trying to do”.

Ava is on a detailed programme of treatment set out for her for the next two and a half years.

She has been on steroids and at the moment she is on chemotherapy which she receives through lumbar puncture procedures  into the spine in Crumlin. She also has a central line into her body and she attends South Tipperary General Hospital  in Clonmel to get injections into that.

Paddy and Richella, who live in Cuirt an Ri in Clonmel, said they appreciated the support given to them by their employers and were overwhelmed by the support shown by their friends, neighbours, family and people they had never even met before.

Their friends Seamus and Michelle Hackett have organised a fundraising campaign for the Lawlors which will be held on November 26th.

Michelle’s sister Sharon Cairns, whose father Noel is one of the organisers, is a member  of  a very popular Little Mix tribute band that play to sold out venues in England,.The group will visit Clonmel that day to put on a show for kids at 2.30pm in the White Memorial Theatre and that night will put on another show in Mulcahy’s at 8.30pm.

“People just want to help  and they have been absolutely brilliant. We cannot believe how supportive people have been really and we are very grateful for their kindness”, said Paddy.