Concert in aid of Simon Community 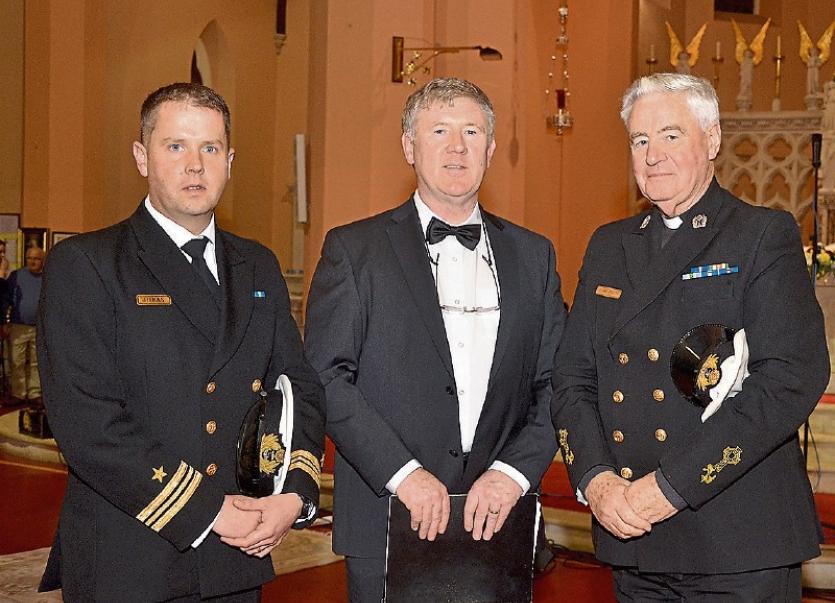 Roscrea was treated to a magnificent night out on Sunday Nov. 13th in St. Cronan's Church, thanks to the work of the Roscrea Community Choir & friends, in aid of Midland Simon Community & Plan International.

This was a truly heart-warming evening, where the people of Roscrea outdid themselves in their support, both in attendance and by helping in a multitude of ways.

Ger Canning from RTE was the cheerful MC who introduced a showcase of talent. But behind the scenes there were so many people who worked tirelessly. Fr. Ger Fitzgerald from the Diocesan Office helped persuade some of our top talent to take part, & the Diocesan Peace and Justice Initiative backed the event fully.

Noel O'Meara set up the bank of screens, supplied by James Dooley, which relayed the performers around the church. Mick Daly took on the challenging task of soundman in an echoing church with a variety of performers, with wingman Tom Stapleton. Liam Maloney's church flowers and Milltown Garden Centre's flower pots were beautiful, St. Cronan's co-parish priests, Fr Michael Harding and Fr Pat Treacy and the parish office staff were welcoming and so helpful, particularly Angela Mulvey, Mary Pyne and Margaret Ryan who were a great support.

The Men's Shed helped Liam Shanahan with parking, the Parish Council assisted with stewarding, while The Lions Club members sold tickets and supervised at the doors.

All around Roscrea the local business people sponsored raffle prizes, covered some of the costs and gave donations. We are indebted to Patterson, Roscrea Credit Union and SuperValu for facilitating us with ticket sales.

A beautiful seascape by Offaly artist Esther Lambe was top prize in our raffle, as well as CDs, DVDs and tickets donated by Tommy Fleming, vouchers from Roscrea Travel, SuperValu and a total of 13 prizes just in time for Christmas.

First up on the night was the choir themselves, making the most of the church acoustics with Benedictus and Songs of Ireland, conducted by Lucy McCarthy and accompanied by Jim Maley on keyboard and Louise Smith on cello. Jim also conducted an a capella version of Ste Duckett's arrangement of Amazing Grace.

Colm Brussels played two of his own compositions, An Ghlóir and A Mhuire na nGrás, with singer Yvonne O'Toole, accompanied by five harpists.

Sacred Heart Children's Choir performed some show-tunes accompanied by William McCullagh, This was followed by Simon Casey of You're A Star and keyboard player Paul Skelton who entertained the packed church with some of Simon's hits and one of his own compositions. They finished with a homage to Leonard Cohen, Hallelujah. The haunting music of Uilleann Pipes and bodhrán then filled the church, along with traditional Irish dancers , with David and Denis Kinsella and the Ann Callanan and Bernadette Flynn Schools of Dance.

Soprano Breffni Fitzpatrick was accompanied by Jim Maley as she sang Le Violette and songs from Showboat and The Mikado, and then it was time for Navy Commander Lieutenant David Fleming and Rev. Des Campion, Navy Chaplain, to give their first-hand accounts of the recent rescue missions in The Mediterranean, reminding us why we were all fundraising.

There was more to come. Local group Passing Through (Colin Williams, Bobby Fahy and Sinéad Browne) played some relaxing American folk and blues, and Orla Fallon from Celtic Woman sang exquisitely while accompanying herself with her harp.

From the sublime to the hilarious, Noel Joyce entertained with self-penned stories, one about hurling, which led nicely to the presentation of the Liam McCarthy and Irish Press Cups by members of previous and current all-Ireland team players. Then jerseys and hurleys, signed by the Senior and Minor teams, were presented for auctioning online on December 7th by Victor Mitchell Auctioneers. Pass the word around, as these are a rare set of a fully signed jersey and hurl for both the senior and minor all-Ireland winning teams, perfect for an Irish business, bar, fan or club at home or abroad. This was a one-off opportunity, with all proceeds going to the charities. Everyone was invited to The Abbey Hall for refreshments prepared by Pauline Loughnane, with contributions by the Country Market ladies and Sean Mulrooney. Finally, Roscrea Community Choir sang the apt 'Speed Your Journey' and an extraordinary night of music and community spirit was at an end.