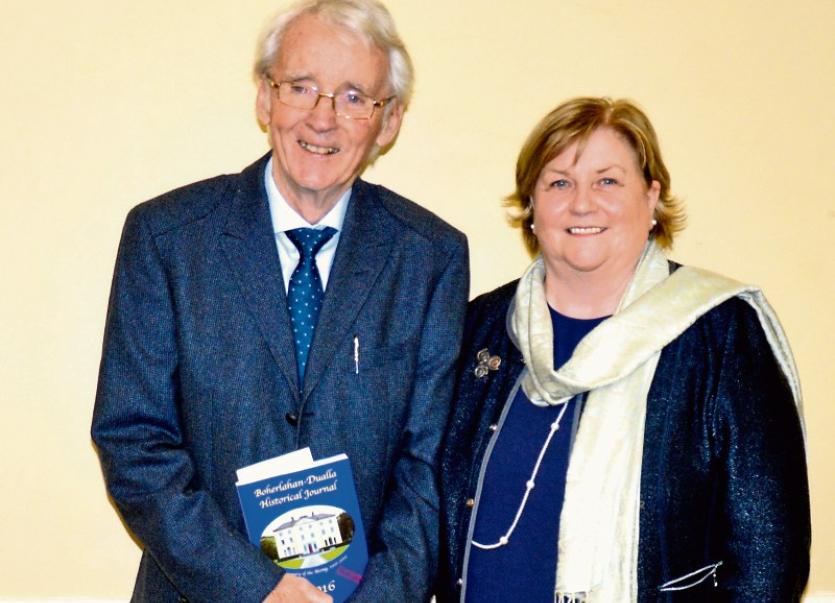 Friday, 11th November, marked the publication of the 19th issue of the Boherlahan-Dualla Historical Journal in the Parochial Hall, Boherlahan.

Tim Joe reminded the people of this parish and beyond that the journal has given the reader the opportunity of knowing the parish, of being aware of the uniqueness of each local area and an understanding of what the former generations have done to shape the parish of today. He concluded his address with a recitation of his own composition encapsulating the contents of the nineteen journals in ‘The journey of the journals’ to great applause.

The cover photo is quite apt in this centenary year of commemoration and celebration, depicting Ballyowen House, the centre of frantic activities during Easter Week, 1916. A number of articles, well researched and documented, give a flavour of what was happening in pre and post 1916. While some from the parish were engaged in extricating the country from the British Empire, others were on the Western Front. A very personal and emotional account of that time is found in a mother’s diary. Not all the young men were distracted by the political events; some found the time to help the recently founded Boherlahan GAA club to win mid, county and All-Ireland finals as seen in the story of Dan O’Brien. Yet, the ordinary events of life happened as gleaned from the Tipperary Star.

The teamwork on threshing day on a local estate contrasts sharply with the individual craftsmanship of a lady fondly remembered for her rush work. Crime was never too far away in the past. A sentence of hard labour for poitín differs greatly with the loss of life on the scaffold for a perceived murder of a land agent. Political leaders, championing the cause of the tenants in the late nineteenth century, found themselves in court on trumped up charges. The story of the stealing of two pigs over a century and a half ago had reverberations half way around the world.

The contrasting fortunes of two villages in modern times are recalled while the race to become the lord mayor of Dualla brings back memories of a great community endeavour. A stroll through the quiet roads of Dualla unearths memories of forgotten families and records the current residents. Land acquisition, still an issue today, for development of rail transport through the parish reveals the families affected and the compensation awarded.

The story of two priests, one working in the archdiocese of Brisbane, virgin missionary territory, the other in the home diocese, discloses very different challenges. Two contemporaries from the parish followed very dissimilar roads in life; one became a fire fighter, the other worked on the land. Yet both made huge contributions to their communities. Legal documents pertaining to the sixteenth century give an insight into the crimes, families, occupations and placenames of a very troubled period in our history.

The twenty-one articles add to our knowledge of the political, economic and social life of Boherlahan-Dualla. They are supplemented with photographs, sketches and maps. The Journal Society is indeed grateful to the contributors for recording the achievements of past generations, both within the parish and outside it. In doing this work, they are leaving a rich legacy for future generations to explore, learn and appreciate.

The launch was preceded by a short drama entitled ‘Molly and World War 1’ performed by the children of senior infants and 1st class of St Isidore’s NS. It was researched and scripted by Anne O’Dwyer and directed by fellow teacher Irene Dwan. It added greatly to the occasion and a debt of gratitude is owed to the pupils and staff of the school and indeed the parents.

A great night ended with the usual refreshments, chat and renewal of old friendships.