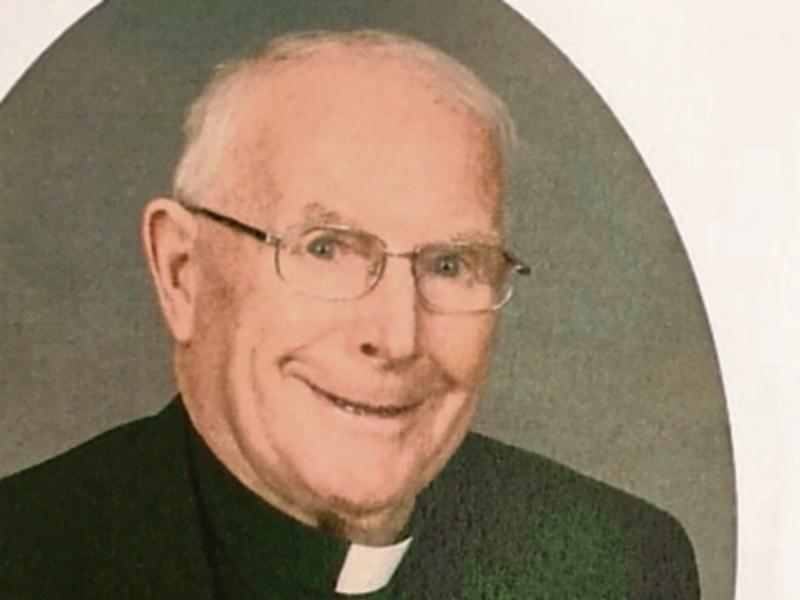 The late Fr James Mulcahy was son of James Mulcahy who spent his teaching life in Grange and was author of An Gleann agus a Raibh Ann. Among his appointments in Waterford Diocese were a number of years spent attached to SS Peter & Paul’s Parish, Clonmel.

He also served in Middlesborough in England,  Graigenamanangh, Rathgormack, Waterford city and especially  in Knockanore where he spent all of his years as a Parish priest

This tribute to Fr Mulcahy was written by Fr. Michael O’Connor, former President of St John’s College, Waterford and a native of Monksgrange, Clonmel.  It was prepared for his time reposing in Grange before his burial in Knockanore.

Fr O'Connor recalled that Fr Mulcahy had launched the 2016 edition of the Grange Journal and quoted what he had said on the night.

"I am delighted to be invited to Launch the 2016 copy of the Grange Journal. It is devoted to 1916. I am probably the nearest in age here to 1916. However, I understand that I was invited to do the Launch not because of that but because the journal also has an article about my late Father.

Because he was the teacher in Grange from 1904 I spent my youth here. We started off on the High Rd  in  Brick before taking up residence in the Teachers House here in the village.

My years as a student in St John’s coincided with the years of the Second World War.  There ware no cars. Tony Heffernan and myself cycled to Croke Park and to Thurles- and to many other venues to see Tipperary playing.

All over the years I have kept up contact with Grange as my home area. I am delighted to be here this evening and delighted to Launch the Journal. My father would be proud of the way that his memory is being honoured at the present time — not only here in Grange but also with the Eigse in Newcastle."

Fr O'Connor continues - The words that I have quoted already are his own acknowledgement that it is Grange, in the community of his family and of the wider parish that he forged the character and faith that sustained his life and that enabled him to give a christian ministry and service to so many people over the years.

When Jim Mulcahy chose to become a priest it was a life choice that was encouraged in this community and there were here many others following the same path—as well as his two brothers, there were three Farrells, two Scullies, Tom and John Murphy, Jimmy O’Connor, John O’Byrne  and a number of others.

He was dismayed to see it become a dangerous occupation. Jim saw many changes during his almost 70 years as a priest. He learned quickly  to cope with the changes that came in with Vatican 2 and he adapted well to the different personalities and character of the four Bishops that were in charge of the Diocese during his time. He coped with these changes not however, without having his own critical evaluation of what was going on.

He was an intelligent man who had a good reputation in Clonmel and Waterford for the quality of his sermons. He was blessed to keep his clear mind and sharp wit almost up to the end. I recall the wry smile on his face a few years ago at the launch of the translation of his father’s book “An Gleann agus  a raibh ann” when he signed copies as Seamus Óg Ó Maolcathaig . Those who knew him well knew that he had his own perceptive assessments of  much that took place but he generally managed discretion when  expressing his opinions especially when these opinions were critical.

I am probably one of the few people here who were present at his first Mass in June 1947. I had started school two months earlier at Easter. Jim’s father was the school principal a the time, so all the school were present at the Mass. We were in the Gallery. Jim’s mother was one of my mothers’ friends — when she came for tea she was brought into the sitting room which was reserved for Christmas and special visitors. Jim’s father was my father’s primary school teacher and I recall getting sweets to mark his retirement just a year before he was due to become my teacher.

I have spent most of my life in St John’s College and when Jim retired he opted to live there which he has done for the past 16 years. So for these years I have had almost daily contact with him. I am sure that it is for these family reasons that Jim asked that I should speak here this evening.

Words of appreciation from me would not do justice to  Jim’s life and character and his life of service in this Diocese. His life was lived out, as I have said, during past hidden years in the parishes in which he served. In these he made many friends and in his retirement he continued to keep many of these. as well as adding new ones.

The people who looked after him, Tom Gaule, Tina Flynn and Margaret Marks  made it possible for him to live in his own house almost to the end except for the last ten days of his life. He had daily visits from Paddy Crotty and frequent visits from the other ‘dog walkers' who took an interest in Jim’s dog, Ben. This is the life that he has been called to give up— lived out in these relationships and many,many others over past hidden years. There are words in the Book of Proverbs that I would like to adapt in summary of his life :” He did good not harm all the days of his life and worked with willing hands. He opened his hands to the poor and reached out to the needy. Strength and dignity were his clothing and kindness was in his heart”.

He was a proud son of Grange and also a grateful one. He greatly appreciated how the community here have honoured his father’s memory and also considered it a great honour to himself to have been featured in this year's Parish Journal and to be invited to launch it.

The cross stretches its arms across everyone’s life. We do not know when, how or in what form it may enter our own lives. For Jim in recent weeks it took the form of bouts of sickness and in the last week removal from his house and the care of the people that he wanted with him. It is now our faith and hope that he has now finally attained the freedom from this cross which he so much desired.

Jim ended his Mass each day with the prayer that the blessing of Almighty God,Father ,Son and Holy Spirit would come upon us. We cannot do better  this evening than express the hope that this blessing may be realised now in its fullness for Jim and that  he may now enjoy the fullness of new life in the glory of the father.