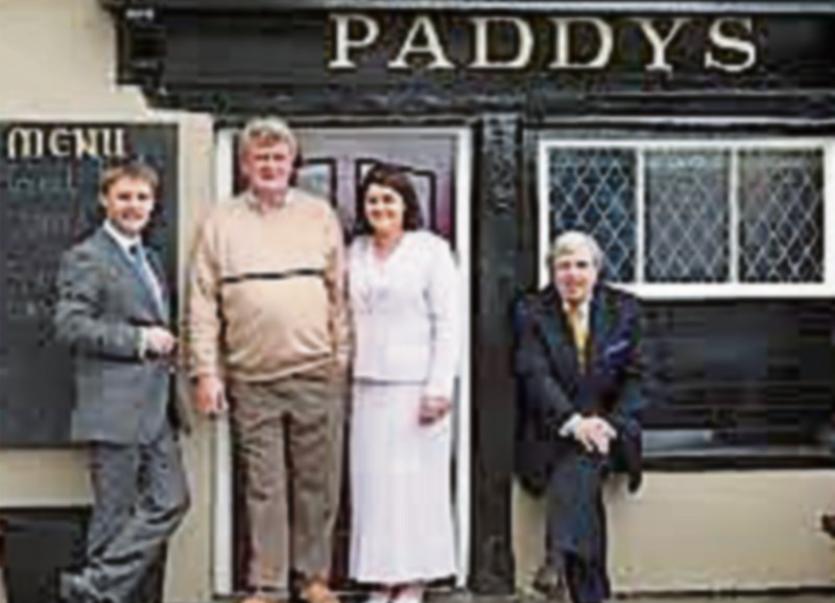 A well known Tipperary pub and restaurant has been given 12 months by Nenagh Court to comply with a planning order from Tipperary County Council.

Mairead and Brendan Tierney, proprietors of Paddys pub and restaurant in the former National Tidy Towns winning village Terryglass, had earlier pleaded to failing to comply with an order to demolish a coldroom at their premises which is built against a bawn wall.

A bawn wall was a defensive structure built against an old Irish tower house. They date from mediaeval times and are protected structures under Department of the Arts, heritage and Gaeltacht legislation.

The court heard that it could take up to €100,000 to remedy the situation

Mrs Tierney, a former Fianna Fail county councillor, told Judge Aingeal Nic Chonduin at Nenagh Court that herself and her husband, Brendan, were joint owners of Paddy's, which featured on the RTE programme At Your Service, presented by the Brennan brothers.

She described the business as “my life and I would like to continue”.

They were committed to following the order but did not have the finances to do so at present.

“We have never ignored the issue at any stage,” she said in evidence. “We are very focused on it as it is in our interest to have it sorted as soon as possible.”

She pointed out that they had originally received permission for the coldroom from Tipperary County Council but this had been appealed to An Bord Pleanala.

“It is a very complicated situation getting the Department of Arts, Heritage and the Gaeltacht to agree things with the council,” she pointed out.

She told her solictor, Isabel Treacy, that if she had to demolish the coldroom in the short term without having the funding to replace it immediatley, she would have to close the business.

“I can't continue in business without a coldroom,” she said.

“The last eight years have been difficlut and while there has been an improvement, it is still slow,” she said.

Mrs Tierney pointed out that in November, County Tipperary chief executive officer Joe MacGrath had told councillors that Tipperary was lagging behind other counties when it came to an improvement in the economy.

“I don't have the resources. I would have to borrow the €100,000 and my losses would not sustain that level of borrowing. My bank is anxious that I continue to reduce my debt,” said Mrs Tierney.

She hoped if trade were to pick up she could borrow the funding, but not at present.

“If I am forced to do it within a shorter time limit you are looking at selling this property. I want to comply but, but I have no access to funds,” she said.

Under cross-examination by David Hodgins, for the council, Mrs Tierney agreed that any dealings she had had with the council had been “pleasant and courteous”.

However, Mr Hodgins said that the matter had gone on for the past four years and the council still had no time frame as to when the coldroom would be demolished.

“The council would like it removed in six months and they think that is reasonable,” he said.

Mr Hodgins stated the council had already given the Tierneys four years to deal with the issue but they were now suggesting it could take another number of years.

The council was also looking for its costs.

However, Ms Treacy said her clients were giving a commitment to demolish, but did not have the funds.

She claimed the matter had taken time to rectify because the Tierneys had been “delayed by bureaucratic decisions”.

Earlier, Ms Treacy told Judge Nic Chonduin that her clients had tried to deal with the matter but needed to construct a coldroom elsewhere before demolishing the unauthorised one.

Architect Dermot Walsh, for the Tierneys, outlined the planning process the Tierneys had gone through with the council and said they had received planning this October for a new build.

However, he pointed out they would need to retain anarchaeologist and estimated that the total cost of the new build could be as high as €100,000.

He also stated that it would not be possible for the premises to stay open without a coldroom.

Judge Nic Chondun described the issue as a “very serious matter” and pointed out the council was only doing its job.

She said she did not know Terryglass but there were local jobs involved.

She adjourned the case to November 23, 2017, to allow for compliance.