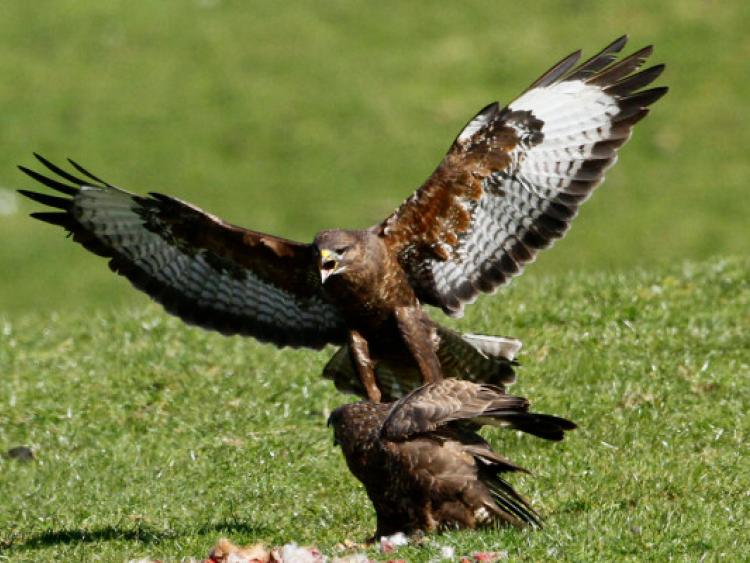 A buzzard on the rampage.

A call to have the protection orders on buzzards lifted has been made following a number of incidents in which the birds of prey have taken terriers and other animals in deadly swoops through mid Tipperary.

Buzzards are causing major problems in the mid-Tipperary area at the present time with a number of terriers having been taken, leading to call for protection orders to be lifted.
Two families have been left in distress after their dogs were preyed upon and killed by giant buzzards in the Templetuohy area where hares, rabbits, cats and other small animals have also been taken.
However, it has also been revealed that there are birds of prey circling overhead Deputy Michael Lowry in Glenreigh, Holycross, while Moyaliffe, Drombane, Inch, Clonmore and Castleiney are also areas where buzzards have been spotted on the attack.
There is one report of a Yorkshire terrier having been attacked, but survived and was patched up by a veterinary surgeon, only to be attacked again and killed a short time later - all by the same buzzard which can have a wingspan of up to three feet with very powerful and strong claws used to take prey.
Forested areas which afford cover are the best hunting ground for buzzards and dog and cat owners are being advised to be on the watch out for their pets which could be taken at the blink of an eye.
There are also concerns that with the increase in buzzards, the spring lambing season after Christmas could be an ideal hunting ground for them - but a very costly one for sheep owners.
See this weeks Tipperary Star for more.