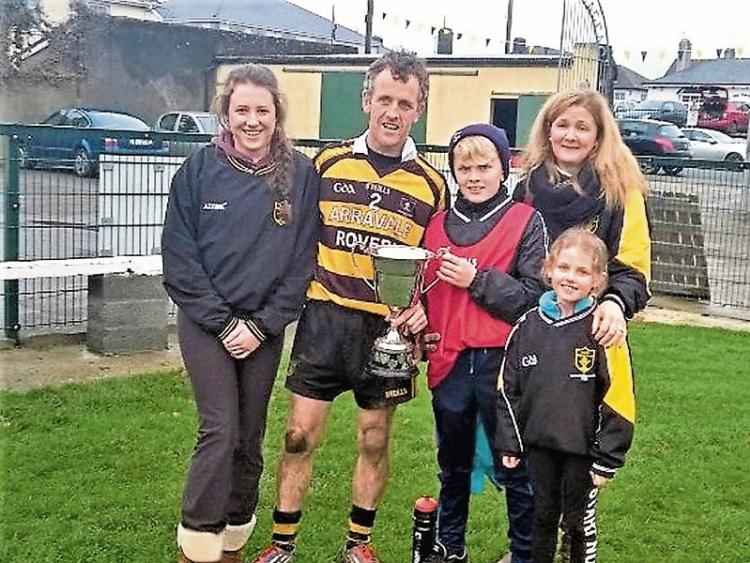 They say it takes age to mature a good wine and it might also apply to Tipperary town dual player Richard Lohan who played on the Arravale Rovers team that won the County Junior Football  ‘B’ title - at the age of 48!

He was joined on the team by two more over forties-  Paddy Maher and David Cleary - and all three will try to add Munster medals to their county ones when they start their provincial campaign against neighbours Oola from Co. Limerick this weekend in the Munster club championship.

Richard and his family have been steeped in Arravale Rovers activity since the seventies.

His father  Brendan Lohan, a Galway man from Aughrim, was transferred  to Tipperary Town from Emly in the early seventies as a Garda. He was involved in many of the physical improvement works in Sean Treacy Park  -  he also hooped hurleys and repaired broken ones, served as a committee member and also a selector on teams.

Richard ‘s uncle Gus played for Galway and later for Clare, and his cousins Brian and Frank Lohan were well known outstanding players for the Banner  County.

Richard’s mother Frances was a valued member of the Ladies Committee during this period.

Indeed her brothers Joe and James Murray from Ballingarry were prominent in the Tipperary Association in Dublin, and James accompanied his great friend Sam Melbourne on various trips around the country showing off his collection of GAA memorabilia.

Richard played at every level in both codes for the Tipperary town club. He was a member of a Tipperary Intermediate Hurling panel also in the late nineties. He suffered a few injury set backs but persevered with the games as a player and latterly as a coach and team manager at juvenile level and as well  as winning a County Intermediate Hurling medal as a player in 1997 along with West Junior football medals and a Crosco Cup medal. He captained the club to West JFC ‘B’ victory in 2008 and JHC ‘B’ win in 2011.

He is presently promoting Gaelic games in the four Primary schools in the Tipperary Parish and these participate with success in the Primary Schools competitions .He is also at present training Arravale Rovers juvenile teams.

He says we never stop learning and training and practicing the skills is important for all players.

Staying positive no matter whether winning or losing is also important and it makes participation more enjoyable for everyone.

His son John Paul, who is an accomplished hurler and footballer, has just left the U12 ranks and is an enthusiastic player. He says that in his opinion competitive games should only introduced at U14 level and young players would be under less pressure from parents and mentors alike.

So good luck to Richard and his team mates on Sunday as he shows that age is no barrier to anything in life.