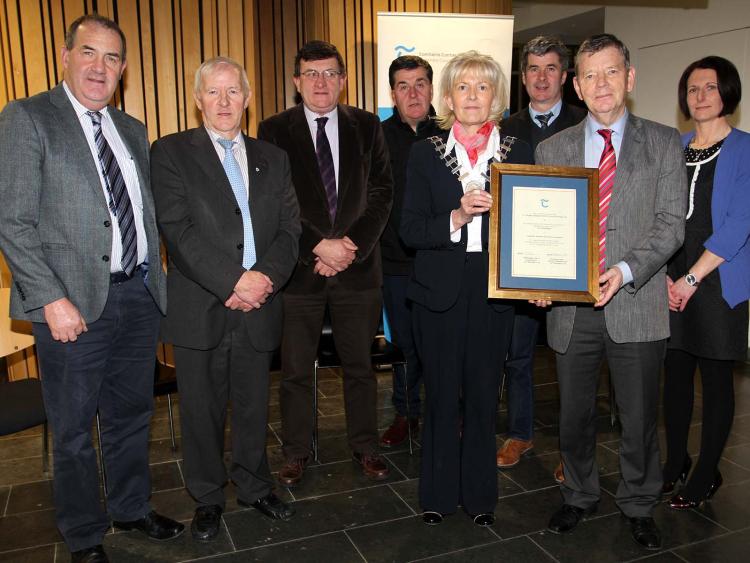 Nenagh Municipal District Council paid tribute to the many volunteers and high achievers in its district at a special awards ceremony in Nenagh last Friday.

All areas of the district were represented at the awards, from Lorrha in the north to Ballina in the south.

But the highlight was the award given to Cloughjordan's 1916 commemoration committee for the work it has done over the year commemorating the life of local patriot Thomas MacDonagh.

Presenting the awards, district Cathaoirleach Cllr Phyll Bugler said the event was an opportunity to say thank you to all those who made their community a better place to live and to work in.

“The awards are all about partnership and co-operation. Our volunteers are our national heroes,” she said. “Nobody realises the work they do.”

She also paid a special tribute to those on burial committees, residents' associations.

District manager Marcus O'Connor said that this year the council had focused on tidy towns groups and community achievement.

However, he pointed out it had been a good year for the district in sport, with Cillian Dunne winning two golds and a silver in the World Games in Prague, and Lough Derg Yacht Club member taking silver in the Rio Olympics. There had also been wins for Newport GAA Club, Duharra Camogie Club and Nenagh Eire Og GAA Club.

Aaron Delaney, aged 9, started his first dance lesson with the MacLoone O’ Meara Dance Academy in May 2014. Within 12 months he achieved promotion to Championship grade. He took silver at the British championships. He was crowned Irish National Dance Champion in May and last week was crowned Munster champion.

Among the projects the council was developing to make the district a more attractive place to live was the €2m being spent on Main Street, Borrisokane, the town park in Newport; the €40m for a new bridge in Ballina; the gas, an dwater upgrade around Nenagh as well as the town's new medieval garden beside the castle, and €2m was spent under the Lough Derg investment strategy which included a canoe trail along the lake.

On the employment front, there were the upcoming jobs in First Data.

“It is something to look forward to as that type of investment has been missing from the district,” he said.

Where the Nenagh MDC awards went