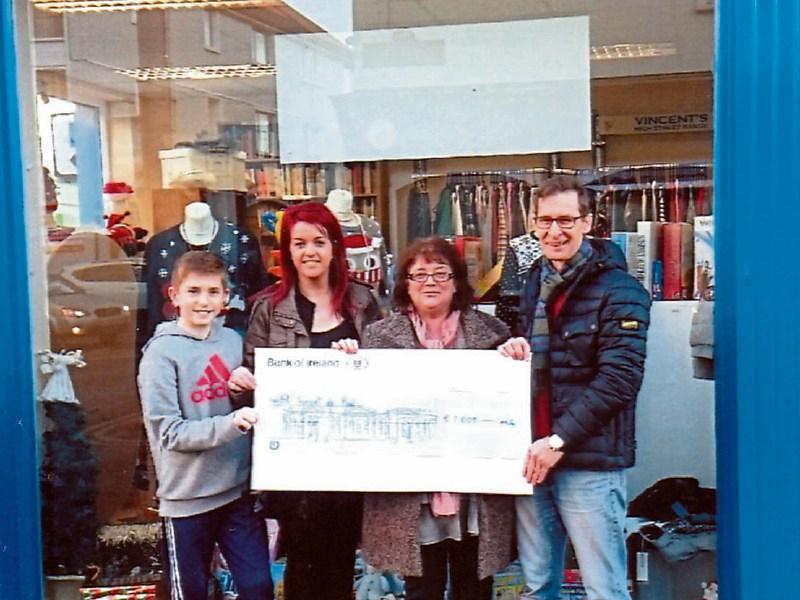 Anne Kerton presents the cheque for €1,005 to Kieran Stafford. Included are Jake Forrestal and Tina Smith.

A Clonmel mother has spoken of her pride at how her late son's memory is honoured with a presentation to a local charity.

Anne Kerton lost her son John to cancer two years ago. He was thirty four.

Now John's thoughtfulness and generosity during his life is being remembered after his death.

John was a great friend to the Clonmel branch of the St. Vincent de Paul and each Christmas made a generous contribution.

He collected the money from family and friends, and discretely, without any fuss or publicity, handed over the money to help those less fortunate in the town.

To honour that memory, a fundraising darts tournament was held in town in aid of St Vincent de Paul.

The competition for the John Kerton Memorial Cup was held in Fozzy's Bar, Davis Road, with players from all over the county taking part.

The well supported event raised €1,005 and the money was presented by Anne Kerton to Kieran Stafford of the St Vincent de Paul.

"I was delighted to be able to make the presentation and to keep John's memory alive. He always wanted to help other people. I am also happy that the darts tournament will now become an annual event and that we can continue to support such a worthy cause", said.

The winners of the tournament were from the Lady Gregory Bar outside Cahir.

Kieran Stafford said he was delighted to accept the money and said it would be put to great use in the run-up to Christmas.

He paid tribute to Anne and her family for honouring John's memory in such a manner.