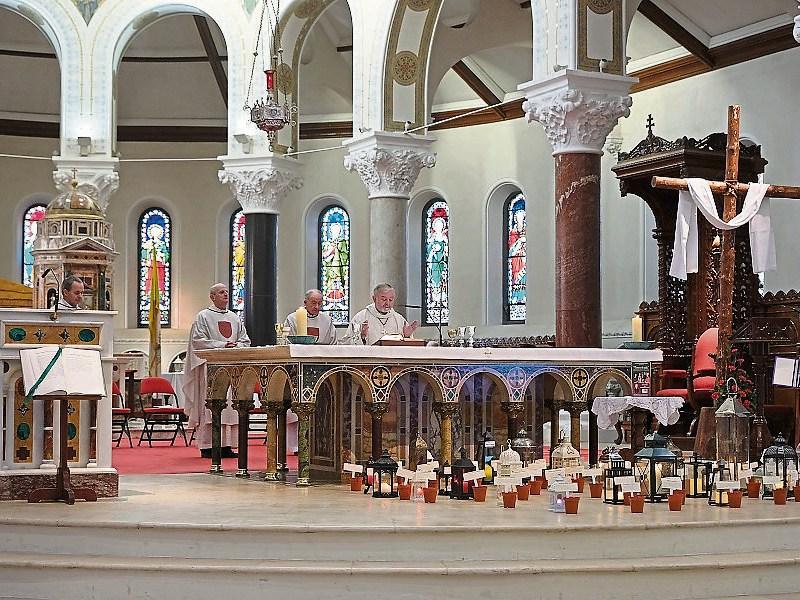 The refrain of the Psalm, “I rejoiced when I heard them say, let us go to the house of the Lord,” captured perfectly the atmosphere of celebration as people, from all corners of the Archdiocese (mid & west Tipperary & east Limerick), gathered in the Cathedral of the Assumption, on Sunday 20th November for a special liturgy to mark the closing of the “Door of Mercy.”

Since last December each of the Deaneries has celebrated the Year of Mercy in their own unique way, but on Sunday week last people from all the parishes came on pilgrimage, to unite as a Diocese in a concelebrated liturgy, led by Archbishop Kieran O’ Reilly.

In his opening address, Archbishop Kieran welcomed everyone and congratulated the priests and their parishioners on the many meaningful celebrations held throughout the diocese, which captured the essence of this extraordinary Jubilee Year.

Each parish was invited to bring a lantern which was placed in the sanctuary area before the Mass began. The lighted lantern symbolised the faith of their community. Alongside each lantern was a potted acorn which each of the 46 parishes of the Archdiocese was invited to plant to symbolise how, from just one act of mercy, great and wonderful things can happen.

Central to liturgy was the involvement of people from parishes throughout the Archdiocese. We remembered all those who have died in our parishes during the past year. Their names were written in a special Book of Remembrance which was placed beside the cross in the sanctuary area. Prayers were also offered for all the newly baptised throughout the Archdiocese. Their names were also recorded in a special book which was placed by the baptismal font. Both books can be viewed in the Cathedral.

During the past year we have being invited as followers of Christ to become ‘Missionaries of Mercy’. This is what we celebrate as parish communities that make up the Church in Ireland today. Forty years ago, the Irish Church established Trócaire, which is the Irish word for mercy. Trócaire, works to put mercy into action in answering the call of the poorest and most marginalized. Therefore, it was appropriate that the Offertory Collection, which yielded €1,762.00, was taken up in aid of the work of Trócaire. We give thanks for all who contributed in such a generous way so that Trócaire can continue to put mercy and justice into action.

Archbishop Kieran began his homily with the opening line of the second reading from St. Paul’s letter to the Colossians, “we give thanks to the Father, who has enriched you to share in the inheritance of the saints in the light.” This line reflected the theme of thanksgiving which echoed throughout the wonderful liturgical music which enhanced the liturgy. The music was provided by the Diocesan choir led by Marette Dunphy with accompanying musicians John Gorman & Ann Marie Dwan. Hymns such as Hail Redeemer and How Great Thou Art praised Christ the King whose solemnity was celebrated on Sunday. Archbishop Kieran spoke about the symbolic closing of the “Door of Mercy.” He reminded us that just as we move from one room into another the closing of this door of mercy invites us into a new place. Archbishop Kieran then introduced his first Pastoral Letter since his appointment over a year and a half ago as Archbishop of Cashel and Emly. In his Pastoral Letter, Archbishop Kieran invited the people of the Archdiocese to join him on a journey of getting to know the Bible better. He told the large congregation that “On this journey we will aim to place the Sacred Scriptures at the centre of our lives at home, in the parish, at school and in the wider world where we live and work.” Archbishop Kieran’s invitation to “Come to the Table” is an invitation to all of us. Over the next three weeks of Advent there will be an opportunity in each Deanery to come to a meeting to share God’s Word (details on Diocesan website: www.cashel-emly.ie ).

Following a short slide show highlighting how the Year of Mercy was celebrated throughout the Archdiocese, Archbishop Kieran, having incensed the Door of Mercy officially closed it and prayed that God would continue to pour out his unending mercy upon the entire world.

In closing the liturgy Fr Martin Hayes extended his thanks to everyone who brought the Year of Mercy alive throughout the Archdiocese.

Teresa Regan on behalf of Diocesan Year of Mercy Committee