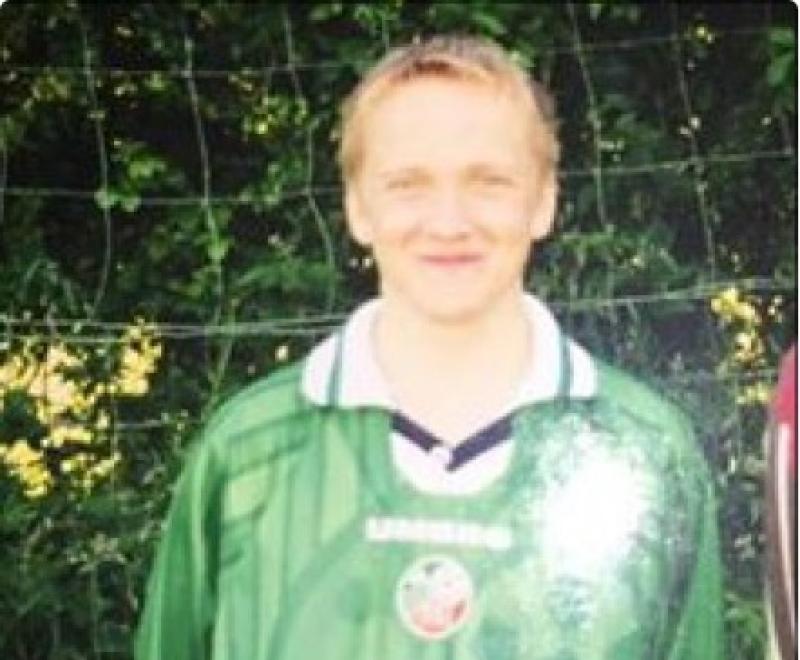 Kevin Fogarty pictured as a schoolboy in his Irish soccer jersey.

Tributes have been paid to Moyne Templetuohy man Kevin Fogarty who died suddenly at the weekend in the UK.
The 32 year old was on holiday at the time with his wife of only a few weeks and their children when the tragedy occurred.
Kevin, a very prominent and talented sportsman represented Ireland in international soccer having played with Peake Villa, and was also a staunch Moyne Templetuohy GAA man. Sadly, Kevin and his family lost their brother Ricky a few years ago in a car accident leaving his parents Bridget and Richie bereft. This latest blow has left them dumbfounded as they try to come to terms with the loss of second son. They are being comforted this week by close family friends and neighbours in the very tightly knit community.
Peake Villa FC posted a touching tribute to the deceased stating that he had played schoolboys football with the club since he was thirteen. "He won a lot of domestic honours with the club in schoolboy football and was capped for Ireland at U14, U15 and U16 level. He won two Munster youths cups with the club and represented the club in two Fai Youth Cup Finals. He played with Villa in the National U21 League and also was on the team that got to the Fai Junior Cup semi final. Both Kevin's brothers Shane and Ricky also represented the club at school boys and Junior level. His passing is made harder to take with his brother Ricky's anniversary at this time. Our thoughts are with Kevin's wife and kids, his parents Richard and Bridget and brother Shane at this time," the statement said.
Moyne Templtuohy GAA club also paid tribute to the deceased. " When the news broke on last Sunday morning that the Almighty God had robbed us of Kevin our hearts went out to his immediate family and friends, his workmates and colleagues. His parish in Templetuohy Moyne and surrounding parishes throughout Tipperary and indeed further afield were Kevin worked and played were saddened to learn that Kevin had gone to his eternal reward.
" At 32 years of age Kevin was too young to leave us. During that short period of time he had touched the lives of so many people that he came in contact with wither it was in his native Tipperary, Kildare or wherever his job of work had brought him. Kevin was everybody’s friend and anyone who knew him was the better for it. He enjoyed life and he lived his short life to the fullest. Kevin would always greet you with a smile on his face. He was never know to be in bad humour and when things would get serious on the job or on the playing field he would always be the one person that would put you in good humour again with one of his witty remarks and roguish smile.
" After his family and friends Kevin’s great love was hurling, football and soccer. In a Gaelic career spanning nearly 24 years he was part and parcel of the Moyne-Templetuohy GAA club and wore the Green and Gold jersey with pride and distinction. Glancing back on records-Kevin won many mid and county titles in hurling and football at both juvenile and adult level with Moyne Templetuohy. He won U10 County, Munster and All Ireland medals in Football. He won an All-Ireland U14 hurling medal against Portuma playing alongside his late brother Ricky. At adult level he was only 17 years of age when he won his first senior divisional medal for Moyne Templetuohy in football after a lapse of 15 years. In 2005 Kevin won a divisional and county intermediate football final with Moyne Templetuohy. He was also part of the U21 team that won 4 in a row divisional titles in hurling and football. A brilliant hurler he won 3 Intermediate hurling finals lining out in the following positions; midfield, wing forward and corner forward. Kevin’s talent knew no bounds, he could play in any position in hurling and football from goalkeeper to corner forward.
"While we celebrate Kevin’s 32 years of life here let us for one moment remember his family-his parents Richie and Bridget, his beloved wife Laurena, his adorable children Layla Jane and Callum, his brother Shane and extended family members. Not alone today do they need our support, but tomorrow, next week, next month and the years that lie ahead.
"Kevin you will never be forgotten, May You Rest In Peace dear friend."
Funeral arrangements to follow.